Taking over from Canaccord’s John Newman and his full bullish steam ahead perspective on Aurinia Pharmaceuticals Inc (NASDAQ:AUPH), Canaccord analyst Neil Maruoka assumes coverage foreseeing more challenges ahead considering the biotech drug development sphere, and its inherent risks. Yet, looking to the drug maker’s Lupus Nephritis candidate Voclosporin and its ongoing Phase III AURORA trial, which just dosed its first patient and “has a good chance of success,” Aurinia’s prospects are still promising all the same.

Importantly, Maruoka anticipates that a great deal of manufacturing, formulation, as well as pharmacokinetics hurdles have been largely resolved, especially when acknowledging the strength of the firm’s Phase IIb AURA-LV trial clinical results.

As such, the analyst assumes from a Buy to a Speculative Buy on Aurinia stock with a $10 price target, which represents a 60% increase from where the stock is currently trading. (To watch Maruoka’s track record, click here)

In fact, Maruoka ventures that the pivotal study “has been significantly de-risked” on back of the success of AURA-LV’s study protocol. Not only could “Voclosporin […] fit well with the standard of care treatment for LN,” as between the drug’s compelling efficacy, “superior” safety profile, and even a treatment that might mean patients won’t need steroids, the drug could excel in both the “current and future treatment paradigm,” but Maruoka also highlights “an attractive partnering candidate” in Aurinia’s LN drug.

“The competitive landscape for lupus nephritis is limited, with few unpartnered products not in development by big pharma. Given its positioning as an add-on therapy and potential synergy with the current standard of care, we believe voclosporin represents an attractive partnering opportunity,” asserts the analyst, who opines: “We would be buyers of Aurinia ahead of potential global partnerships for voclosporin in LN and, possibly, for additional indications (including ophthalmology).”

Moving forward, “Although we anticipate few clinical catalysts next year, we believe that Aurinia remains undervalued based on the strength of data generated by voclosporin to date, and the strong likelihood of success in the Phase III AURORA study,” contends Maruoka, who anticipates that thanks to $200 million plus in cash flow, the drug maker has enough funding to finalize clinical development for its lead asset. An AURORA data read-out is due in two years with a prospective domestic launch to follow by 2020.

Additionally, in the last 3 months, according to TipRanks, Elemer Piros of Cantor rates a Buy on Aurinia stock with a $14 price target, which implies a 124% increase from where the stock is currently trading. 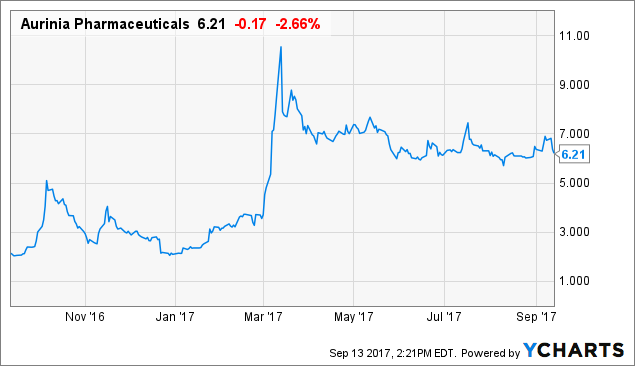