Canaccord Assumes a Buy on KemPharm Inc (KMPH); Sees 154% Upside for the Stock

Dewey Steadman of research firm Canaccord is chiming in today on shares of KemPharm Inc (NASDAQ:KMPH) from a confident perspective. The analyst assumed coverage on KMPH with a Buy rating and a price target of $9, which implies a potential upside of close to 154% from where the stock is currently trading.

From Steadman’s standpoint, this biotech firm yields commercial and clinical value with its development of prodrugs of existing therapies for attention deficit hyperactivity disorder (ADHD) as well as pain and central nervous system disorders by utilizing internally-derived ligand technologies.

Yet, the analyst acknowledges, “We view KemPharm as a rare diversified development stage company with multiple shots on goal in different therapeutic areas; however, a dearth of potential catalysts may quell investor interest until late 2017.”

Shining in the firm’s favor is last week’s successful Phase 1 proof-of-concept (POC) data for KP415, the firm’s prodrug of methylphenidate in development for the treatment of ADHD.

Ultimately, “It’s a perfect time to revisit the KemPharm story. On the heels of KP415 PoC data last week, there’s not much, in our view, to catalyze KMPH shares in the near term. However, later in 2017 we see several significant catalysts that could propel valuation. For KP511/ ER, we’ll see results from an intranasal human abuse liability study in 1Q/17 which could validate KemPharm’s methodology in the ER pain space. For KP201/IR, we expect a similar HAL read in 2H/17 along with PoC data in 2017. If the PoC data is positive, we expect KP201/IR to move further into the clinic and forward toward an NDA in 2018,” Steadman surmises. 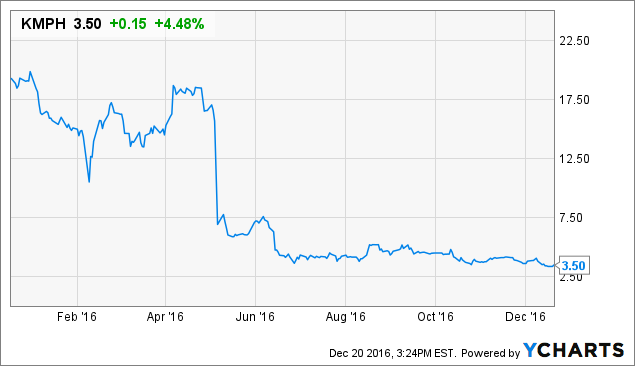 3 Healthcare Stocks That Can Double This Year