Advaxis, Inc. (NASDAQ:ADXS) is looking at a “milestone rich” new year as far as Cantor analyst Mara Goldstein sees the drug maker’s opportunities ahead. Though after posting financial results for fiscal 2017, the company’s shares crashed almost 13%, this bull is standing strong in Advaxis’ corner all the same. Though this year may not have been Advaxis’ year to be a gains maker in the market, the analyst continues to bank on serious upside potential ahead, believing 2018 could be the drug maker’s year with clinical data forthcoming.

As such, the analyst maintains an Overweight rating on ADXS stock with a $19 price target, which implies a 533% upside from where the shares last closed. (To watch Goldstein’s track record, click here)

Goldstein asserts, “The shares have struggled over the past few months, which we attribute to management changes and concern over cash burn. With the pipeline prioritization and wind down of expenses related to the EU filing, we think the burn rate should return to a moderated level, with cash lasting into FY19. Our PT is materially above where the shares are trading, though we think the value of the company’s programs is undiminished.”

This year is going out with “strategic priorities,” the analyst continues, noting that in the third quarter, the biotech player revealed “a pipeline prioritization designed to streamline development efforts to larger indications and stretch cash, which currently stands at $70 million at the end of FY17, which is expected to last into FY19.” Meanwhile, 2018 will also likely bring a new CEO leader at the helm to take over in interim CEO Anthony Lombardo’s stead along with a CMO.

In the first half of the new year, the drug maker will kick off a registration trial of ADXS-DUAL in metastatic cervical cancer in combination with OPDIVO. Meanwhile, there is an enrollment likewise in motion for AIM2CERV, a Phase III trial of axalimogene filolisbac in highly risk locally advanced cervical cancer, in which an update is anticipated in the early days of 2018. The analyst angles for a filing of conditional approval MAA in Europe in the first quarter of 2018, one that has been pushed back by approximately a quarter, yet she has yet to factor revenues from a conditional approval into her model. Lastly, NEO, a collaboration with Amgen and one of the company’s two early-stage tech platforms should start to dose patients in 2018. NEO is likely to commence a Phase 1 study in the first half of the new year in colon cancer, head and neck cancer, and non-small-cell lung carcinoma (NSCLC). The analyst adds, “ADXS-HOT could see multiple IND submissions and a first-in-human study in 2018.”

Glancing ahead, “ADXS-PSA has multiple possible readouts in 2018. A Phase I/II trial of ADXS-PSA as a monotherapy and in combination with KEYTRUDA (MRK, NC) is expected to have data from the Part B in 2018 as well. Data to date has shown stable disease in 4/13 patients (monotherapy) and increase in the number of T cells in the microenvironment, which suggests the possibility of enhancing the role of checkpoint inhibitors,” Goldstein contends.

Advaxis closed out fiscal 2017 with $12.0 million in revenues, outperforming the analyst’s expectations of $10.3 million. The company’s net loss per share of ($2.31) likewise outclassed the analyst’s projection of ($2.38). Closing out the year with $70.9 million in cash and equivalents, the analyst believes this will be sufficient to fund operations into fiscal 2019, with projected revenue of $3.7 billion anticipated for 2030.

Additionally, TipRanks shows one other bull on the Street betting on this drug maker, with Swayampakula Ramakanth of H. C. Wainwright rating a Buy on ADXS stock with a $23 price target, marking a nearly 667% upside from where the shares last closed. 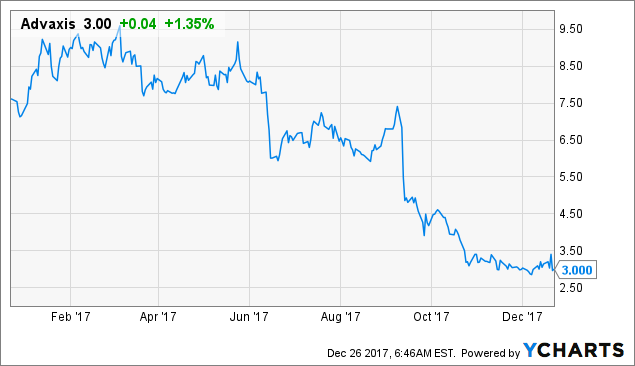