Brean Capital analyst Difei Yang was out today with a few insights on Vanda Pharmaceuticals Inc. (NASDAQ:VNDA), following the news that the U.S. District of Delaware ruled in favor of the company in a patent infringement lawsuit against Roxane Laboratories. Shares of Vanda are currently trading at $14.55, up $0.38 or 2.68%.

Yang commented, “We believe prior to today’s announcement, Vanda shares priced in the assumption that Fanapt would face generic competition by the end of 2016. With today’s announcement, The outlook is significantly improved and this extension of the asset life will also allow Vanda to develop additional indications and potentially increasing peak year revenue potential of Fanapt.”

“Favorable ruling of ‘610 patent prevents the FDA approving ANDA to Fanapt until November, 2027 which is a major improvement from our previous assumption of generic entry in 2023,” the analyst added.

Yang reiterated a Buy rating on shares of Vanda Pharmaceuticals, while raising the price target to $24 (from $20), which represents a potential upside of 67% from where the stock is currently trading.

As usual, we recommend taking analyst notes with a grain of salt. According to TipRanks.com, which measures analysts’ and bloggers’ success rate based on how their calls perform, analyst Difei Yang has a yearly average return of -9.5% and a 38% success rate. Yang has a 23.7% average return when recommending VNDA, and is ranked #3977 out of 4127 analysts.

All the 5 analysts polled by TipRanks rate Vanda Pharmaceuticals stock a Buy. With a return potential of 32.5%, the stock’s consensus target price stands at $19. 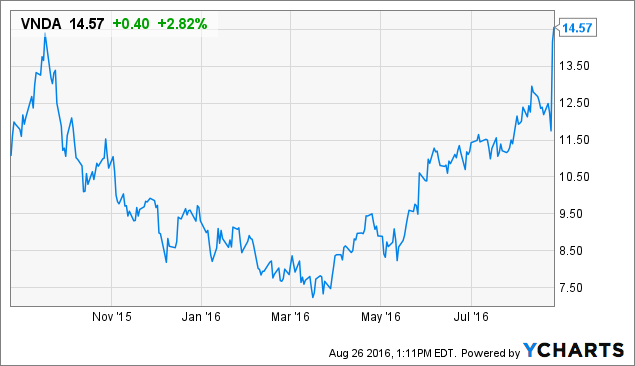