This is an exciting time for Aurinia Pharmaceuticals Inc (NASDAQ:AUPH) and its shareholders. The shares have gone up over 120% after the drug maker announced positive top-line results from its AURA-LV Phase IIb study with Voclosporin in patients with lupus nephritis .

Canaccord analyst John Newman believes that Voclosporin’s long-term Phase 2 data suggest Phase 3 success, and as such, the analyst reiterates a Buy rating on AUPH, with a price target of $10, which implies an upside of 18% from current levels.

Newman noted, “AUPH plans to release more data analysis in future corporate or scientific conferences, and we are expecting a presentation at the National Kidney Foundation 2017 Scientific Clinical Meetings in 2Q17, with details that could continue to support the stock’s climb. The AURA study demonstrated voclosporin achieved complete and partial remission endpoints at week 48 vs week 24 for treating lupus nephritis (LN), and both doses showed statistical significance vs control, a significant positive.”

“We continue to expect initiation of the global Phase 3 AURORA study (~n=320) for voclosporin in 2Q17, with data release after un-blinding at 52 weeks […] We expect positive results in Phase 3 to create significant shareholder value long-term,” the analyst concluded.

As of this writing, all the 4 analysts polled in the past 12 months rate Aurinia stock a Buy. With a return potential of 12%, the stock’s consensus target price stands at $9.50. 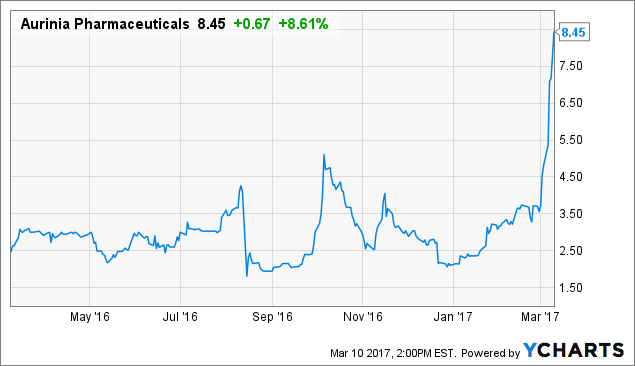