Atossa Genetics Inc (NASDAQ:ATOS) shares are rocketing 55% on back of investor buzz for tomorrow’s conference call. The hot topic? The ATOS team is poised to share further Phase 1 trial findings evaluating oral endoxifen, designed for breast cancer prevention- and the Street is upbeat for the data release.

Considering up to half of women metabolize tamoxifen poorly, meaning they then require a subtherapeutic dose of endoxifen, this then hikes up recurrence risk for breast cancer survivors. The market is enthused to see what findings are in store from Atossa’s trial evaluating its oral formulation of endoxifen, which would be a supplement treatment for the patients who have difficulties metabolizing tamoxifen.

In this Phase 1 trial, the drug maker already released preliminary data back in September and October indicating a positive safety profile for the breast cancer prevention asset, with endoxifen’s levels soaring above the therapeutic threshold.

On a bullish note, Maxim analyst Jason Kolbert points out, “Atossa is developing an oral endoxifen for prevention of breast cancer recurrence under the 505b2, based on known data for safety and efficacy of tamoxifen and its metabolite endoxifen… meaning potentially accelerated timelines to approvals.”

For context, “The study was designed to determine the pharmacokinetic properties of endoxifen in oral and topical form as well as the safety and tolerability,” explains the analyst.

“Atossa’s candidates are known drugs with published safety and efficacy profiles which is de-risking, in our view. Tamoxifen and fulvestrant generate a combined $2B annually. As such, just a small portion of the market points to upside at the current valuation. The CAR-T program could attract a partner and represents additional upside. We see multiple catalysts ahead as trials begin and data emerges in 2018,” Kolbert contends.

In reaction, the analyst roars right along the bullish parade seen on Wall Street today, reiterating a Buy rating on ATOS stock with a $2 price target, which implies a 156% upside from current levels. (To watch Kolbert’s track record, click here) 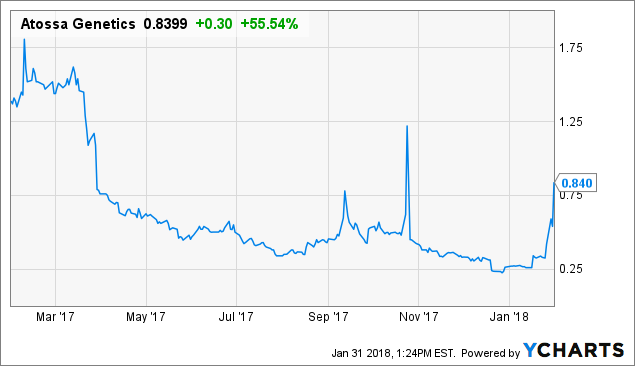