Healthcare analysts are weighing in on ContraVir Pharmaceuticals Inc (NASDAQ:CTRV) and PTC Therapeutics, Inc. (NASDAQ:PTCT), as the stocks turned extremely volatile today. While ContraVir shares jumped after receiving DSMB clearance for CMX157 vs. TDF, PTC is assessing its next steps after the FDA denied its DMD drug appeal, sending shares plunging. Below are the analyst comments along with current ratings and price targets.

ContraVir shares jumped nearly 18% today after the drug maker announced that an independent DSMB (Data Safety Monitoring Board) has recommended that its phase IIa study comparing head-tohead CMX157 vs. tenofovir disoproxil fumarate, known as TDF or Viread (commercialized by Gilead) in patients with chronic hepatitis B (HBV), continue as planned to higher dosing.

In reaction, Maxim analyst Jason Kolbert reiterated a Buy rating on CTRV with a $4.00 price target, which implies an upside of 66% from current levels.

Kolbert commented, “The positive safety data, in our view, are continued validation of CMX157’s unique chemistry, which induces rapid uptake in the liver, followed by more efficient conversion. The recently announced interim efficacy and safety data validate our belief that CMX157 potentially could be the next backbone regimen against HBV: 1/12th the dose of Viread, 99% reduction in viral load, positive safety profile.”

As usual, we recommend taking analyst notes with a grain of salt. According to TipRanks.com, which measures analysts’ and bloggers’ success rate based on how their calls perform, analyst Jason Kolbert has a yearly average loss of 15.9% and a 28% success rate. Kolbert has a 8.1% average return when recommending CTRV, and is ranked #4076 out of 4180 analysts. 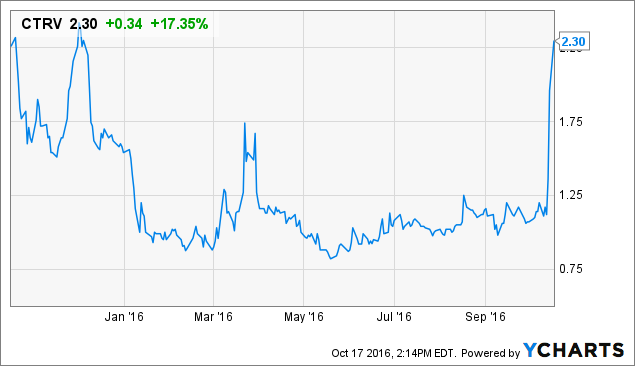 PTC Therapeutics saw its shares falling 37% today after the drug maker announced that the FDA has denied the company’s appeal of the Refuse to File letter it received in February regarding its New Drug Application (NDA) seeking approval of Translarna for the treatment of nonsense mutation Duchenne muscular dystrophy.

Is there light at the end of tunnel? RBC Capital analyst Simos Simeonidis doesn’t think so.

The analyst explained, “We think that PTCT does not have much of a leg to stand on on this effort. The simple reason is that while eteplirsen’s dataset may indeed be weak and incomplete (again, we agree 100% with this view), and thus we may truly not know right now whether eteplirsen works, this also means that there is a real possibility that eteplirsen could actually work and indeed provide a real benefit to DMD patients. We just don’t know this from the existing eteplirsen dataset, and thus one could buy FDA’s argument that it had to make eteplirsen available to patients (NOTE: again, we don’t personally agree with this argument; we’re stating what the argument for eteplirsen’s approval was).”

As such, Simeonidis reiterated a Sector Perform rating on shares of PTC Therapeutics, with a price target of $5.00, which reflects a potential downside of 44% from last closing price.

Simeonidis’ picks have a 32% one-year average loss with a 21% success rate, according to analyst ranking service TipRanks. Simeonidis is ranked #4064 out of 4180 analysts.

As of this writing, all the 8 analysts polled by TipRanks rate PTC Therapeutics stock a Hold. With a return potential of nearly 32%, the stock’s consensus target price stands at $11.14.