On Wednesday, Inovio Pharmaceuticals Inc (NASDAQ:INO) announced that its HIV vaccine, PENNVAX-GP, had produced an antibody (humoral) immune response as well as a T cell (cellular) immune response in a Phase 1 trial in healthy and uninfected adults.

In reaction,  Aegis analyst Difei Yang raised her price target for INO from $11.00 to $14.00, while reiterating a Buy rating on the stock.

Yang commented, “We are encouraged by strong immune response though we believe we still need to see efficacy against infection in future development […] We view the infectious disease opportunity as promising given the strong responses from the Ebola, Zika, MERS, and HIV trials. We are now including the infectious disease portfolio in our valuation based on the median value from comparable portfolios. The infectious disease pipeline is externally funded, and we expect Inovio to continue to find outside funding for its pipeline.”

In addition, in a research note issued Wednesday, Maxim analyst Jason McCarthy raised his price target for INO to $12.00 (from $10.00), while reiterating a Buy rating on the stock.

McCarthy said, “The immune responses demonstrated by PENNVAX-GP are among the highest responses shown for an HIV vaccine. With this data, Inovio now has a more clear path forward in the HIV space and the stage is set for a larger clinical program. In addition, we are focused on the VGX-3100 program and the start of the P3 program in cervical dysplasia, which we expect in mid-2017.”

Overall, out of the 6 analysts polled by TipRanks (in the past 12 months), 5 rate Inovio stock a Buy, while 1 rates the stock a Hold. With a return potential of 61%, the stock’s consensus target price stands at $12.83. 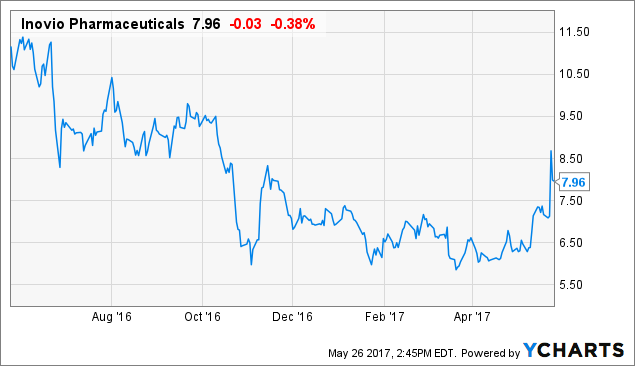