Recently, two of the biotech world’s biggest needle movers, Aurinia Pharmaceuticals Inc (NASDAQ:AUPH) and Pulmatrix Inc (NASDAQ:PULM), have certainly made investors dizzy with the rise and fall aftermath from AUPH’s positive clinical trial results and equity financing to PULM’s 10K filing release that revealed 2016’s finances were largely not as strong as in 2015.

Analysts from Mackie and Dawson James have chimed in with their takes amid the big ups and downs, with Mackie finding the funding important for establishing a clinical pathway and Dawson James cautiously awaiting a reason to become more confident in PULM’s future. Let’s dive in to see why investors should keep a careful eye peeled to these two stocks:

Aurinia shares initially fell over 25% on March 14th on back of the news the biotech firm is turning to $15.5 million equity financing at $6.75 per 22.3 million shares, which marks a 36% discount to the close price prior to the deal’s announcement.

Mackie analyst Andre Uddin comments on the share crash, calling it quite a “big haircut for a big offering,” but remains undeterred in his bullish standpoint on the stock, as he sees the financing as well worth it to fund the AURORA trial. As such, the analyst reiterates a Speculative Buy rating on shares of AUPH with an $11 price target, which represents a 55% increase from where the stock is currently trading.

Uddin is “looking towards the Northern Lights,” a.k.a. the AURORA Phase 3 trial, which is anticipated to initiate by the second quarter of this year with a top-line data readout due in the first half of 2019.

“AUPH stock took a nosedive after the deal was announced due to the steep discount on pricing of the offering,” concludes Uddin, noting, “AUPH intends to use this financing to fund the upcoming AURORA Phase 3 trial. The next catalyst is the NKF conference on April 20.”

However, considering AUPH has yielded a 276% YTD return, the analyst remains confident in making the biotech firm one of his 2017 top picks.

According to TipRanks, which measures analysts’ and bloggers’ success rate based on how their calls perform, two-star analyst Andrew Uddin is ranked #2,462 out of 4,558 analysts. Uddin has a 50% success rate and garners 57.1% in his annual returns. When recommending AUPH, Uddin realizes 153% in average profits on the stock.

TipRanks analytics demonstrate AUPH as a Strong Buy. Out of 3 analysts polled by TipRanks in the last 3 months, all 3 are bullish on Aurinia stock. With a return potential of nearly 57%, the stock’s consensus target price stands at $11.00.

Time for Pulmatrix to Step Up Its Game

Initially, after news broke that Pulmatrix had filed its 2016 10K while releasing a corporate update for the close of the year on March 10th, shares experienced a collective 38% drop over a span of the week. However, since the hurtle, the stock has since recovered 45% of its value.

M&A buzz has been advantageous for investor sentiment. Reports surfaced Wednesday that Mylan could be raring to acquire the firm, which led shares to seesaw back with fierce resurgence. Mylan has already collaborated with PULM on PUR0200, designed to treat patients with chronic obstructive pulmonary disease (COPD), so a bid would be in line with the company’s goals. Interestingly enough, this followed Mylan’s decision to let its international option to develop, manufacture, commercialize and manufacture products correlated with PUR0200 expire back in December. Moreover, the same day, news broke that 5am Ventures opted to buy 251,188 of common stock, another arrow of solid momentum for PULM.

It has generally been a good week for the biotech firm after a rough March, with encouraging news of two new top fungal experts joining PULM’s scientific advisory board for the development of its inhaled drug for fungal infections in the lungs, PUR1900.

Analyst Sherry Grisewood of Dawson James believes all eyes will be on the firm in the wake of its recent volatility, after the stock “broke critical support.” Even before the 10K filing, there had been waning in share power following January to February strength.

Yet, what was such a red flag in the firm’s 10K that led to such a stagger in shares? Finances seemed to exhibit some weakness, with revenue for 2016 bringing forth $0.8 million, a step down from 2015’s $1.2 million. Griselwood attributes the year-over-year dip to the end of funding involving the European PUR0200 bioequivalence and PK clinical trial. Meanwhile, while revenue sank, expenses shot up, with R&D costs escalating from $7.2 million in 2015 to $10.2 million. On an encouraging note, general and administrative spending was cut over in half from 2015’s $17.0 million to 2016’s $8.0 million. PULM yielded a greater net loss of $27.8 million considering 2015’s net loss of $26.2 million, with the firm closing February with $9.7 million in cash flow.

For the analyst, “This appears to be a continuation of a decline underway after the stock’s run-up in late January and early February that was perhaps further driven by the change in focus of the Company towards PUR1900 and impact from possible investor disappointment over Mylan’s lack of interest in exercising the option for PUR0200. Management will now have to ‘step up its game’ to secure a new strategic partner for PUR0200 while at the same time, move PUR1900 more rapidly into the clinic.”

Moving forward, “We suspect investors will be closely monitoring how quickly management can demonstrate progress on both these fronts. With as an extensive portfolio of intellectual property as is held by Pulmatrix, we would also expect that investors may want to see efforts towards monetizing some of the inherent value in the patent estate. Therefore, until there is news on one or more of these fronts, we believe investors may be likely to take a ‘wait and see’ attitude towards PULM shares,” Grisewood contends. 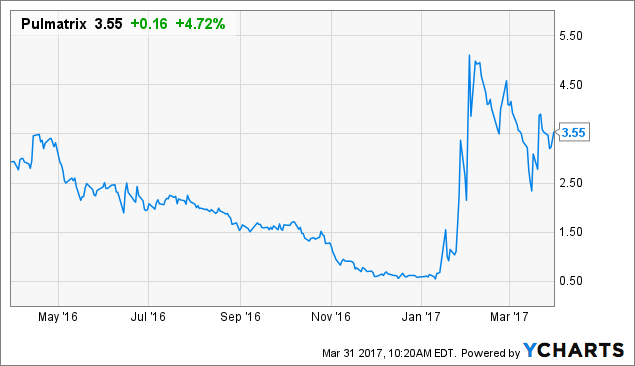