Analyst Alicia Yap and her team cut their revenue estimates on Alibaba Group Holding Ltd (NYSE:BABA) due to impacts from some of the recent developments, although they remain positive on the company. Among the challenges is Alibaba’s cooperation with the State Administration for Industry and Commerce (SAIC) to fix the problem of counterfeit items for sale on its platforms.

As a result of these lower estimates, they trimmed their price target from $107 to $100 per share, although they kept their Overweight rating on the stock.

The Chinese online retailer also recently announced changes to management at Tmall and new policies for merchants. Also at the beginning of the month, Alibaba suspended online lottery sales. And finally, the company will see lower revenue from interest since it finished the small loan restructuring plan for Ant Financial.

Overall, Yap and her team think Alibaba is moving in the right direction with the changes it made at Tmall. The SAIC has blasted the company for all the counterfeit items that are for sale on its online platforms, particularly at Tmall.

The new merchant policy demonstrates Alibaba’s commitment to improve controls on the platform while also improving the shopping experience by raising the entry requirements for merchants. For now, it’s expected that the result will be a reduction in merchant number growth and the number of item available for purchase on Tmall.

Alibaba also reportedly reassigned the former president of its Taobao online property to Tmall, which Barclays analysts think will result in the management of all three of the company’s online properties becoming more centralized. They also think it will result in operational efficiencies.

According to TipRanks.com, which measures analysts' and bloggers' success rate based on how their calls perform, analyst Alicia Yap has a total average return of 26.8% and a 63.2% success rate. Yap has a -10.5% average return when recommending BABA, and is ranked #481 out of 3551 analysts. 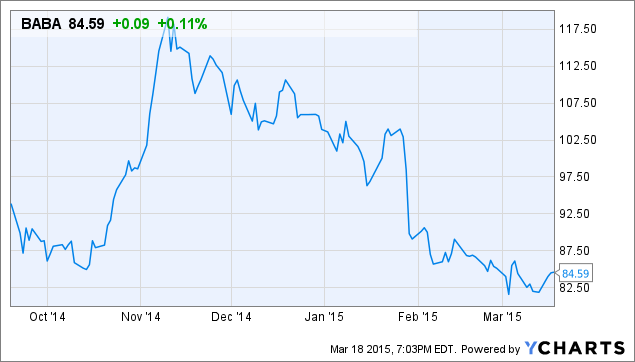