Aruba Networks, Inc. (NASDAQ:ARUN) is a Sunnyvale, California based company who develops and sells enterprise wireless LAN and edge access networking equipment that provides access management, network infrastructure and mobility application solutions which allows governments, businesses, and schools to create next-generation mobility networks. The company released its fourth quarter report on August 26th and its results were rather impressive. Since then, the stock has climbed more than 4%.

Aruba Networks’ president and CEO Dominic Orr said, “We achieved significant market share gains, supported by the continued ramp up of our full line of 802.11ac access points as well as strong Instant and Clear Pass sales. The focused execution of our product roadmap underscores the merits of our first-to-market strategy and further strengthens our leadership position.”

On August 27th, Amitabh Passi UBS analyst upgraded his rating for Aruba Networks from Neutral to Buy and raised his price target from $21 to $25. He noted the company’s higher guidance and “focus on shareholder returns and quality of earnings” and “Increasing evidence of a more rigorous focus on operational discipline, with a surprising cost rationalization program announced for FY15”as his reasons for the upgrade.

According to TipRanks.com, which measures analysts’ and bloggers’ success rate based on how their calls perform, analyst Amitabh Passi has a total average return of 8.7% and a 62.2% success rate. Passi is ranked #763 out of 3265 analysts.

Separately on August 27th, J.P. Morgan analyst Rod Hall upgraded his rating for Aruba from Underweight to Neutral with a $21 price target. He reasoned, “We continue to see Cisco as a significant threat to expected earnings growth but the company continues to lose share to Aruba even after rolling out 802.11ac products of their own.” He added, “We continue to see Cisco as a potential threat in the WiFi market. However, with yet another restructuring under way and new threats in their switching market we believe that CSCO’s energy is focused away from WLAN.” Hall has a -1.8% average return on all stocks he has rated and a 42% success rate in making recommendations. 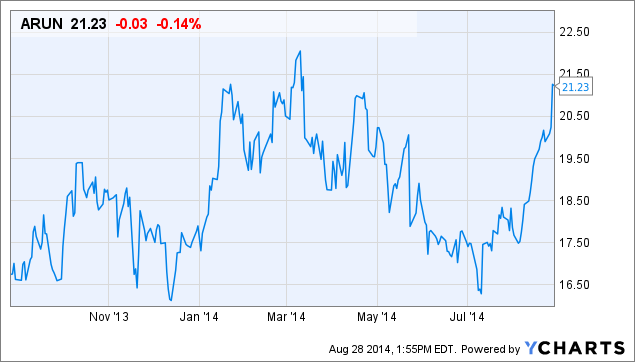