Analyst Vs. Analyst: Blackberry – Who Do You Side With?

Today we are going to be having an analyst versus analyst special, featuring Cormark Security analyst, Richard Tse versus Macquarie analyst Kevin Smithen for Blackberry (BBRY), a Canadian high-tech company which is regarded as a pioneer in the smartphone industry. The company’s products are used everywhere around the world, however in recent years the company has undergone rapid decline and there are mixed feelings about how investors should engage in Blackberry stock. Some say that Blackberry still has a great amount of potential and could turn things around, but some say the company’s decline is permanent and it is only a matter of time until Blackberry will eventually decline into bankruptcy.

Blackberry, once known as Research in Motion, is often regarded as being one of the first to enter the smartphone industry. The Blackberry phone, at one point, was the “must have” phone for business professionals and teenagers, alike. It attracted youth with its trendy BBM app (Blackberry Messaging) and business men and women with its ability to browse the web on your handheld and keep in touch with your emails on the go. At its peak, in 2008, the company was trading at almost $150 a share.  Today, the once top-of-the-line stock is trading at only $10.61.
How could this technological empire crash in such as a short period of time? And more importantly, can Blackberry return to its glory days when it once dominated the smartphone market?
There have been many different explanations as to why the sudden crash of Blackberry’s stock happened. The most prominent explanation was that it simply lost the smartphone battle to Apple and Samsung. While Apple released one iPhone at a time, each release leading to record sales, Blackberry released a number of different phones in response. This backfired on Blackberry as they played the quantity card over the quality card. As the Blackberry trend diminished, so did their stock price.
Today, when many people think of Blackberry they think; old, out of style, or ‘those guys are still around’? And when people hear of Blackberry’s stock they automatically think, ‘sell’ because it’s not 2008 anymore and this company is on the way out. However, Cormark Security analyst Richard Tse has a different take on it.
Richard Tse has been working in the field of business investment since 1998. Before he started working at Comark he worked at National Bank Financial and prior to that, with Merrill Lynch’s Global Technology Team. Tse got his Bachelors of Commerce, at the University of Toronto in 1991 and he became a certified Chartered Accountant at the Canadian Institute of Chartered Accountants in 1996.  He finally became a certified Chartered Financial Analyst at the Association for Investment Management andResearch in the year 2000. Tse has been awarded as the top ranked analyst numerous times from surveys from Brendan Wood International, Starmine, and Greenwich.
In a research noted published on June 20, 2014, Richard Tse maintained a Buy rating on Blackberry with a price target of $11.50 following  recent “short-term actions” which should lead to a positive sentiment in the coming months. Tse noted, “Blackberry finally showed investors that it has given itself some breathing room when it comes to its turnaround efforts. While that is not to say the company is out of the woods yet, we believe the results and outlook provided by Management were reasonable for us to assume it has been able to hold the erosion in value while at the same time giving Management some operating flexibility to pursue targeted growth opportunities that revolve around the company’s network assets. And given a credible plan and what is expected to be a phased launch of new products from now to the end of F2015, we believe the sum- of-the-parts valuation approach we have been using to value the stock will be held by the company- and perhaps even increase it”.
Tse also believes that “the smaller than expected operating loss and an increase cash balance of $3.1 BB (from $2.7BB) provide enough financial resources for the company to execute its turnaround, particularly given an outlook for breakeven to positive cash flow by the end of F2015”.
According to TipRanks.com, which measures analysts and bloggers success rate based on how their calls perform, Richard Tse currently has a one-year average return rate of -1.1% and a 50% success rate. Tse is currently ranked #2606 out of 3157 analysts. Richard Tse first started recommending the stock in November of 2010, when the stock was worth $59.61. He has made eight recommendations on the stock, six of those recommendations were Buys, and today the stock is worth only $10.61. According to Tipranks Tse has a -3.1% average profit specifically when recommending Blackberry.
Our second analyst we will be looking at is Kevin Smithen.  Smithen is currently managing director at Macquarie. He has over 12 years of experience as a financial professional experience and is registered as a Broker-Dealer Agent and is able to buy/sell securities. Before coming to Macquarie Kevin worked at; Stetson Street Partners as a portfolio manager, Lazard Asset Manager as a director, Coatue Capital LLC as a managing director, and at Salamon Brothers as a media investment banker.
Kevin Smithen has a different take on how to manage your Blackberry stock. In a research note released on June 24, 2014 Smithen maintained an Underperform rating on Blackberry’s stock with a price target of $7.07, which represents how BBRY still must demonstrate the value proposition of BES 12 to enterprise customers.
Smithen noted, “We feel BBRY shares are currently in ‘no- man’s land’. The May and August qtrs. Are likely to be ugly so we feel it is too soon to play a BES12 launch in Nov. We expect that BBRY shares will have one more run into the launch this fall, but we remain concerned about the company’s ability to offset services declines with ramping software revenue”.
Kevin Smithen currently has a one-year average return rate of -2.4% and a 48% success rate. Smithen is currently ranked 2776 out of 3157 analysts. Smithen first started recommending Blackberry in June of 2012, when the stock was worth $28.52. Most of Smithen’s ratings on the stock were either to Hold or Sell the stock. However, even though the stock has gone down since Smithen first started recommending the stock and even though Smithen has mostly recommended Hold and Sell ratings, Smithen has a -9.6% average profit specifically when recommending Blackberry.

In conclusion, there are definitely mixed feelings on Blackberry. Many believe that Blackberry is passed its prime and won’t ever return to the glory days of $140 stock price. However, some, such as Richard Tse do believe that Blackberry still has good potential and is a company worth investing in. Since Tse’s recommendation in late June the stock price has gone up. But in the long run only time will tell which of these two analysts has made the best recommendation. 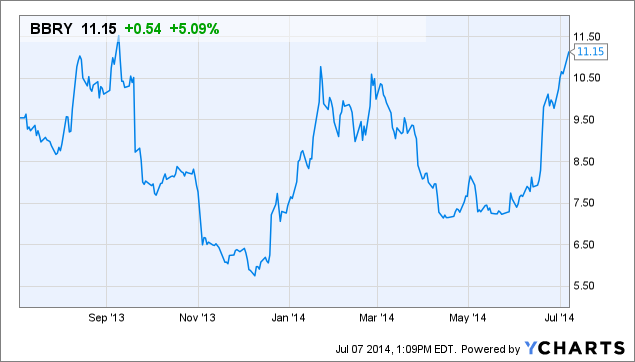