Shen commented: “With the drastic reduction of the company’s 2015 shipment guidance (~1GW), we see the potential for a negative cycle ahead —more so than currently exists—as the company is at risk for not delivering on its customers’ shipment expectations, thereby eroding the fragile sense of trust it has with its customers. The brunt of the impact will likely be felt by its Chinese customer base as the company prioritizes certain higher ASP markets such as the U.S.”

The analyst continued, “Over time, we would expect customers to accelerate the shift of business to other module vendors in an effort to guarantee supply. Additionally, the company’s business model is also now embracing lower margin module tolling in an effort to preserve cash. All in, as the company’s revenue, income, and CF continue to deteriorate, debt service payments are ramping up in October (~$161mn) and May’16 (~$226mn), resulting in a challenging situation becoming ever more challenging.”

According to TipRanks.com, which measures analysts’ and bloggers’ success rate based on how their calls perform, analyst Philip Shen has a total average return of -15.4% and a 22.3% success rate. Shen is ranked #3729 out of 3752 analysts.

Out of the 5 analysts polled by TipRanks, 4 rate Yingli Green Energy Holding stock a Sell, while 1 rates the stock a Hold. With a return potential of 92%, the stock’s consensus target price stands at $1.17. 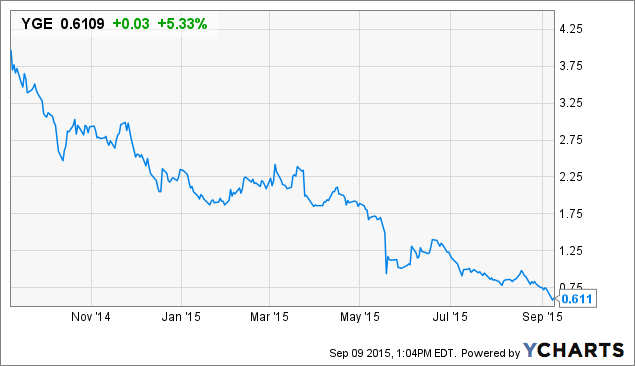