In a research note published yesterday, William Blair analyst Mark Miller downgraded Tractor Supply Company (TSCO) to a Market Perform rating, based on concerns that the “rural wealth effect” has shifted from a historical tailwind to a headwind, the benefits from internal initiatives have moderated relative to past years, and valuation risk could increase as the growth algorithm is put under the microscope. No price target was assigned.

Miller wrote, “It is unclear the extent to which other factors are affecting the business beyond unfavorable weather, which historically has balanced out across six-month periods. We have growing concern that the “rural wealth effect” has begun to negatively affect the company’s business. Rural land values have begun to decline and farmers’ cash income is projected to be down significantly year-to-year, according to the U.S. Department of Agriculture (see exhibits on the following pages), on lower cash receipts, a change in value of crop inventories (i.e., falling commodity prices), and reduced government payments”.

The analyst continued, “While the long-term growth opportunity at Tractor Supply remains significant, we believe it is prudent at this time to step to the sidelines and are reducing our rating to Market Perform. In years past, margin outperformance has been able to offset weakness on the top line. There are still avenues for margin improvement, but the company has seemingly collected the low-hanging fruit, making it more vulnerable to exogenous economic factors such as falling rural land values, declining farmers’ income, and deflation. Admittedly, these are cyclical issues that will abate at some point, but we believe could have an impact for an extended period”.

On the positive side, “for long-term investors, Tractor Supply is one of the best-run companies in our coverage universe with an attractive long-term growth profile. The company servesa unique customer niche that it not represented by any other major retailer and is lessexposed to competition from the e-commerce channel. Its merchandising and operational capabilities continue to improveand capital deployment (via dividends and share repurchases) remains shareholder friendly”.

According to TipRanks.com, which measures analysts and bloggers success rate based on how their calls perform, analyst Mark Miller currently has a one-year average return of 3.5% and a 56% success rate. Miller is ranked #1495 out of 3211 analysts. 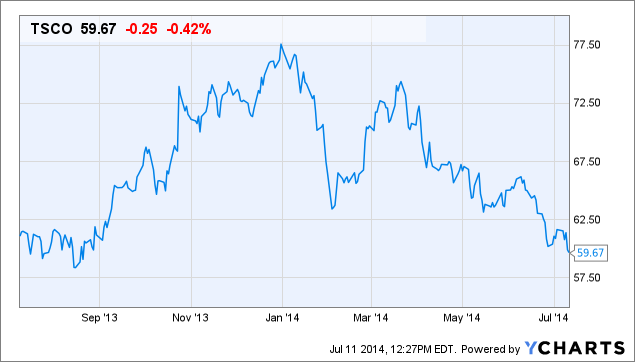