In a research note released yesterday, William Blair analyst Amy Noblin downgraded Michael Kors (KORS) to a Market Perform from an Outperform, based on growing concern that this long-standing momentum name will now trade more on sentiment than fundamentals, more specifically the elusive fear of when the brand will peak in North America. No price target was provided.

Noblin wrote, “As one of the most sought-after brands globally, Michael Kors still has meaningful runway for growth, in our opinion. Yet the company is embarking on an investment year, which while prudent will put additional pressure on the top line to sustainthe shares. With North American brand awareness now on par with peers, decelerating but still stellar 1-, 2, and, 3-year comps, and a valuation that, while down from the highs, still gives meaningful credit for the brand’s potential, we view the risk/reward profile as balanced. We want to be clear that this is not a callon the quarter, which will be reported on August 5. We believe that brand momentum has remained strong and there is still likelihood of upside to numbers”.

The analyst continued, “Michael Kors’s comp trends have been nothing short of stellar, averaging 38% over the last four years, 21% in fourth quarter 2013, and 17% projected for 2014. Despite the strong trends, and we view guidance as likely conservative, the 1-, 2, and, 3-year trends are not surprisinglydecelerating asthe stacked comps become increasingly tougher. Decelerating comps will overtake sentiment as to the brand’s ultimate maturation in North America. Again, Michael Kors’s performance, particularly in light of the difficult environment, has been exceptionally strong. Yet the company is embarking on an investment year, which while prudent will put additionalpressure on the top line to sustain the shares. The companyis investing in store growth (including more flagships), shop-in-shop conversions, e-commerce, and enhanced information systems and distribution infrastructure. In addition, the operating margin of 30.5% in 2013 is industry-leading, and Coach’s recent demise has called into question sustainable long-term margins for the category overall. The combination of slowing comps and investment, even if temporary, will create concern about the sustainability of the operating margin”.

According to TipRanks.com, which measures analysts and bloggers success rate based on how their calls perform, analyst Amy Noblin currently has a one-year average return of -18.3% and a 0% success rate. Noblin is ranked #2997 out of 3215 analysts. 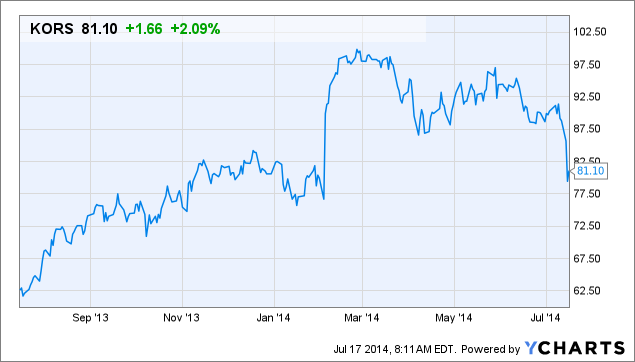