In a research report released yesterday, William Blair analyst Jon Andersen downgraded shares of Annie’s (NYSE:BNNY) from an Outperform to a Market Perform, on the heels of the news that BNNY is to be acquired by General Mills (GIS) for $820 million ($46 a share). No price target was assigned.

Andersen wrote, “For Annie’s, the transaction will create significant value for shareholders. The purchase price represents a 37% premium to Annie’s shares closing price on Monday September 8, 2014, and is 51% above the 30-day average share price. The purchase price multiple is 4 times Annie’s fiscal 2014 sales of $203 million, 31 times EBITDA of $27 million, and 54 times EPS of $0.86.” Andersen continued, “For General Mills, the strategic rationale is clear, as the Annie’s brand is well positioned as a rapidly growing natural and organic offering in convenient meals and snacks, both of which are priority categories. In addition, the acquisition will help General Mills scale its U.S. natural and organic product segment, currently a $330 million business composed of the Cascadian Farm, Muir Glen, LARABAR, and Food Should Taste Good brands.”

Andersen added, “In July 2014, we added Annie’s to the William Blair Current Better Values list based on the prospect for improved execution and earnings growth as fiscal 2015 unfolded, as well as our view that the stock had reached a favorable valuation level—with strategic support in light of recent acquisition activity—both transaction volume and multiples—in the sector. While it is possible that Annie’s may field a superior offer(s), we believe it is likely this deal will close on the specified terms and, therefore, reduced our rating from Outperform to Market Perform.”

According to TipRanks.com, which measures analysts’ and bloggers’ success rate based on how their calls perform, analyst Jon Andersen has a total average return of 19.5% and a 50% success rate. Andersen is ranked #1026 out of 3291 analysts. 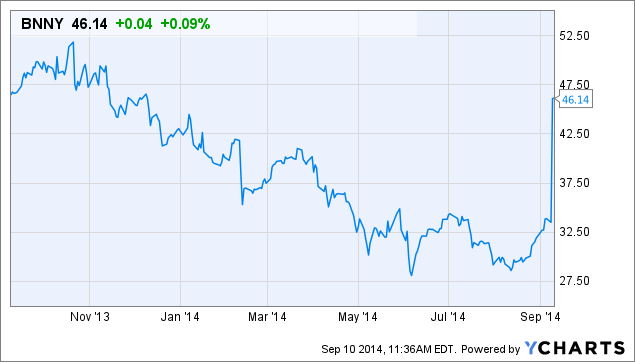