In a research report published yesterday, Wedbush analyst Betsy Van Hees downgraded shares of Advanced Micro Devices (NYSE:AMD) from a Buy rating to a Neutral rating and cut her price target to $3 (from $6), following the company’s announcement that its current President and CEO Rory Read is to be replaced by Dr. Lisa Su.

Van Hees wrote, “While we absolutely believe Dr. Su is the right person to lead AMD and view her appointment as a significant positive for AMD, the timing of her appointment seems rushed since AMD will report Q3 earnings next Thursday (Oct. 16 at 5:30pm ET; ir.amd.com) and both Dr. Su and Mr. Read are still negotiating their respective compensation packages. We are worried this is a sign that AMD’s turnaround may be taking longer than anticipated and that the weakness in consumer PC may cause Q4 guide to fall short of expectations. While we applaud the promotion of Dr. Su and Mr. Read for his considerable contributions as CEO, given the challenges in AMD’s primary end markets, and seeming unplanned timing of her promotion, we think the prudent place to be at this time is on the sidelines. Our PT of $3 (from $6) is based upon about 13x (from 14x) our 2015 pro forma EPS estimate of $0.24 (from $0.41).”

According to TipRanks.com, which measures analysts’ and bloggers’ success rate based on how their calls perform, analyst Betsy Van Hees has a total average return of 17.8% and a 58.2% success rate. Hees has a -13.1% average return when recommending AMD, and is ranked #154 out of 3335 analysts. 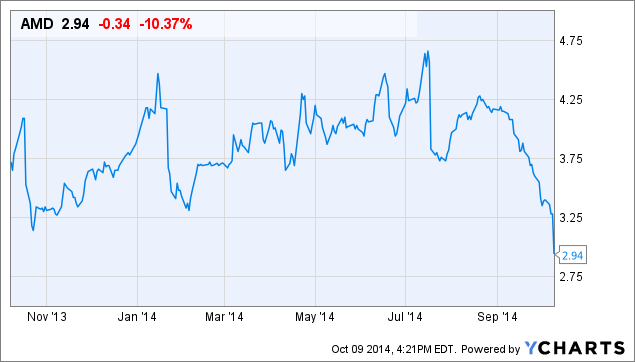