In a research report released today, UBS analyst Brennan Hawken downgraded shares of JP Morgan (NYSE:JPM) to a Neutral rating from a Buy rating with a $64 price target, as Hawken believes there is not sufficient upside to his price target.

Hawken noted, “We are downgrading JPM as there is not sufficient upside to our price target and we are unconvinced that JPM’s multiple will expand in the current environment. We continue to believe JPM has an outstanding franchise and is a very well-run bank. However, we would prefer to own earnings recovery stories, as we believe they present more opportunities for alpha than the stable franchises. Specifically, given the secular pressures on the business plus the nearly insatiable appetite for fines by regulators, we would rather not be reliant on the environment improving.”

Hawken continued, “Digging further into the composition of the money center deposits shows meaningful differences. Specifically, JPM has proportionally less core deposits than other large domestically focused banks. Given the greater reliance on wholesale funding, we expect JPM could suffer from more significant deposit outflows when rates begin rising. Further, in analyzing the sources of deposits by business line, we expect JPM to have the highest deposit “beta” of the money centers, and therefore may benefit less from the increase in interest rate due to the fact that they will be under more competitive pressure to re-price faster and more dramatically.” The analyst added, “We also believe there is an elevated risk of downside from increasing capital requirements impacting JPM. Specifically, JPM is more reliant on wholesale funding than other money centers which could expose them to a more significant capital buffer as recently proposed by Fed Gov. Tarullo. Since JPM already returns a larger portion of its earnings to shareholders and is not currently running with a large buffer above its fully phased in minimums, we believe the potential for negative surprise on the capital return front is more significant for JPM than for other money centers.” 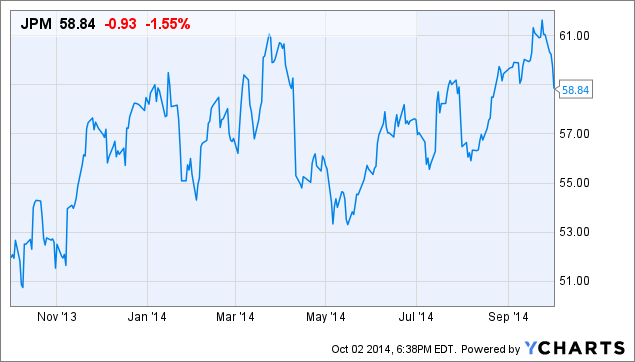