Stratasys Will Remain A Show Me Story For A Period Of Time, Says Brean Capital

In a research report released Tuesday, Brean Capital analyst Ananda Baruah downgraded shares of Stratasys (NASDAQ:SSYS) from Buy to Hold, after the company negatively pre-announced fiscal 2014 results and guided ’15 OMs materially softer than the Street had envisioned. No price target was provided.

Baruah wrote, “We’ve been vocal since the Sep Q print that if SSYS could maintain OMs of ~17% in ’15 (vs. then ~17% for ’14) and grow organic revenue at least 25%, after speaking with numerous holders we believed the stock could work very nicely in ’15. We conversely suggested that if the OM’s were materially lower in ’15 that it would be very challenging for the stock to work. Given SSYS’s ’15 OM guidance of 13% (vs. 15% in ’14 and our prior estimate of 17% before last evening’s negative Dec Q pre-announcement), we’re moving to a Hold rating while the stock digests the new business model.”

The analyst added, “SSYS announced they are taking a $100M – $110M writedown for MakerBot, the prosumer / consumer company they acquired in 6/13 for $403M plus earnouts, and we believe that investors could come to view this as a headwind for the foreseeable future.”

Stratasys Ltd. provides additive manufacturing (AM) solutions for the creation of parts used in the processes of designing and manufacturing products and for the direct manufacture of end parts. 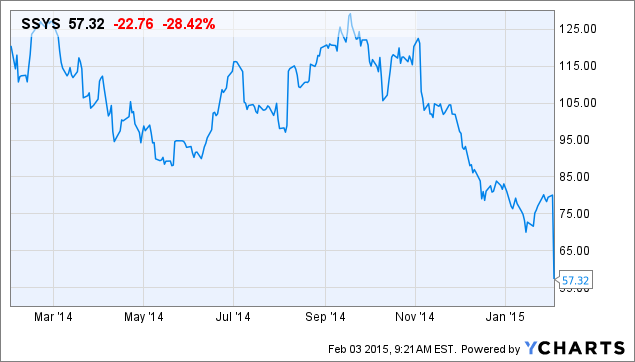