RBC Capital analyst Mark Mahaney came out today with a report on Yelp Inc (NYSE:YELP), downgrading shares to Perform from Outerform and reducing the price target to $50 from $82 following very negative results from the company’s first quarter earnings report.

Mahaney observed, “Rev of $119MM came in below RBC/Street @ $120MM and at low end of the Guide for 1st time. The key Local Ad segment came in light, with Yelp citing a temporary salesforce issue. Hw, the Q2 Guide doesn’t imply a temporary problem, suggesting competitive challenges or Tough TAM factors or both. EBITDA also came in dramatically below expectations at $16MM, or 21% below Street, with a shortfall in high-margin Brand rev a key factor.”

The analyst also noted, “We upgraded the shares almost a year ago @ $58 on a major pullback, and our call hasn’t worked. And we don’t have confidence that it will from here either. We still view YELP as a top-of-funnel, strong-brand unique asset with downstream transaction capability. But that transaction capability could take a long time to play out.”

Furthermore, “The root cause, we believe, is likely less competitive factors (tho Google is an issue overseas) and likely more Tough TAM issues (it’s very hard to sustain high-growth momentum against a high-churn SMB base, especially when execution isn’t flawless). We still see strategic value to YELP, but that by itself isn’t enough to keep us from moving to the sidelines.” 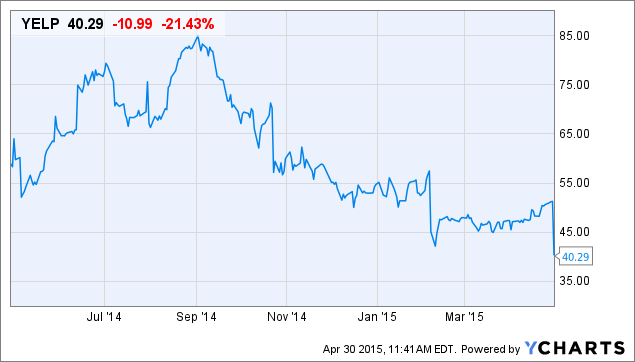