Oppenheimer Is Hitting the Pause Button On OvaScience; Downgrades Shares To Perform

In a research report issued today, Oppenheimer analyst Rohit Vanjani downgraded shares of OvaScience Inc (NASDAQ:OVAS) to Perform from an Outperform rating, as shares of OvaScience have traded up over 60% since the beginning of August and nearly doubled since late April.

Vanjani commented: “The increase, we believe, is largely due to the company hitting on its timelines with respect to the AUGMENT and OvaPrime programs. Management anticipates commercial launch of AUGMENT in late 2014/ early 2015 and completion of additional proof-of-concept studies for OvaPrime in late 2014 as well. Though we do embed a fair amount of conservatism in our AUGMENT forecasts and give no credit to the OvaPrime program, with the recent share price moves, we are moving to the sidelines and changing our rating on OvaScience.” 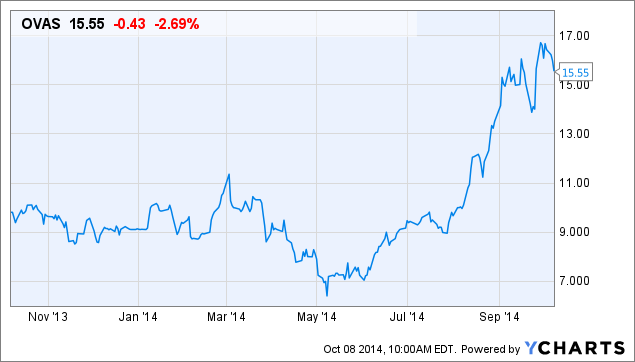