In a research report released Tuesday, Oppenheimer analyst Rohit Vanjani reiterated a Perform rating on Opko Health Inc. (NYSE:OPK), as shares have traded up nearly 45% since the beginning of 2015 and have surpassed the analyst price target.

Vanjani stated, “Shares of OPKO ended flattish after reporting a top-line beat, largely on a milestone payment from partner Tesaro. The 4Kscore test continues to ramp with management still highlighting end 2015 as a potential inflection point in sales, when the test is expected to start getting reimbursed. The company has a number of catalysts in 2015 including the NDA filing for Rayaldee in 1Q15, start of a phase 2 Factor VII trial in 1H15, the Rolapitant PDUFA in September 2015, and initiation of the Alpharen phase 3 trial in 2H15. Despite these catalysts, we downgrade OPKO to Perform and remove our $12 price target.” 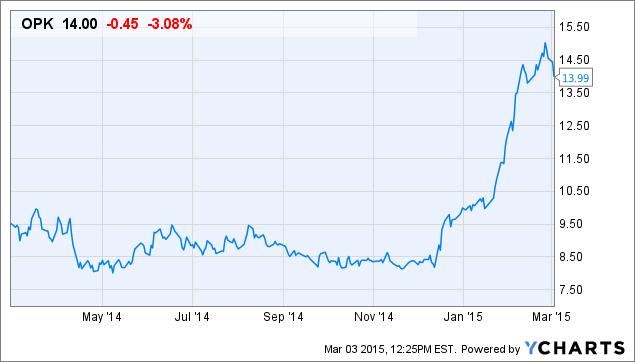