Shares of MannKind Corporation (NASDAQ:MNKD) were hammered today after J.P. Morgan analyst Cory Kasimov downgraded the stock to Underweight rating, following the slow uptake of the company’s lead drug Afrezza. The analyst thinks that the early launch struggles could be difficult to overcome.

Kasimov commented: “Afrezza’s launch has been predictably slow out of the gate (1Q sales of ~$1.1M, incl stocking). What’s more troubling, however, are the apparent impediments to adoption. Most notably, both partner Sanofi and MNKD acknowledged that the pulmonary function testing (spirometry) required by the FDA has been a major hurdle, which is something we flagged as the key risk at the time of approval. We lived through the failed Exubera launch of 2007.”

“While much of the focus then was on the device and odd dosing (two things Afrezza soundly addresses), we still believe the PFT requirement was the main obstacle to adoption (theoretic lung cancer risk was the final straw). Other current impediments management cited incl sampling issues and delay in getting doctor’s appointments. The bottom line is that we are increasingly skeptical that Rx will gain material traction anytime soon, which could put the balance sheet into an increasingly precarious position. Yet there’s still significant value reflected in the company’s diluted market cap of ~$1.8B.”, the analyst added. 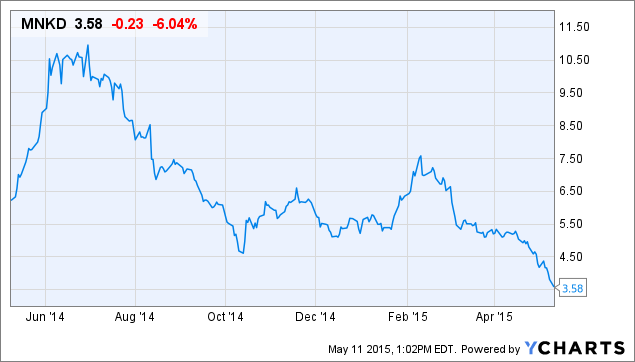