Acura Pharmaceuticals, Inc. (NASDAQ:ACUR) shares were on the rise Friday after an upgrade from MLV’s analyst Vernon Bernardino. The analyst upgraded Acura to Buy from Hold, while keeping his price target at $1.00.

Bernardino explained, “We are upgrading ACUR based on FDA’s recent acceptance of a New Drug Application (NDA) for ALO-02, an opioid product from Pfizer (PFE, NR) specifically designed to deter abuse, including via the intranasal (i.e., snorting) route. We believe the FDA now appears favorable to reviewing ACUR’s NDA for its own opioid product, hydrocodone/acetaminophen (HA), which is also designed to deter abuse through snorting. With this near-term overhang reduced, we therefore believe risk in the stock is also reduced.”

The analyst continued, “As the stock is down more than 50% from $2/sh a year ago, we believe investors anticipate a significantly dilutive financing. However, we note the recent deal with Egalet (EGLT, NR) for commercialization of Oxaydo ($5MM upfront and $2.5MM additional possible by YE15) significantly diminished this risk (we proj. raising $13MM in 2015 vs. our prior $21MM). Further, pending favorable discussions with the FDA, we believe conducting another intranasal likeability study may not be needed, representing upside to our PT.”

According to TipRanks.com, which measures analysts’ and bloggers’ success rate based on how their calls perform, analyst Vernon Bernardino has a total average return of -12.5% and a 34.3% success rate. Bernardino is ranked #3413 out of 3483 analysts. 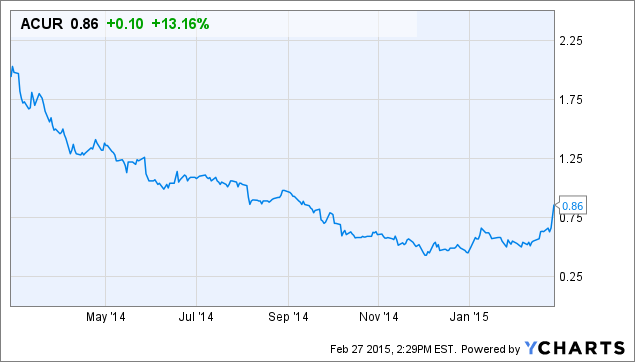