In a research report issued today, Roth Capital analyst Joe Reagor upgraded shares of Golden Minerals (NYSE MKT:AUMN) to a Neutral rating to a Buy rating, while cutting his price target to $1.15 (from $1.30). The report follows the news that the company will sell a certain non-core assets for up to $1.3 million.

Reagor explained, “At the end of Q2 2014 AUMN had $10.4 million in cash and has raised an additional $3.9 million in cash since the end of the second quarter, based on our estimates. The $14.3 million in estimated cash equates to approximately $0.30 per basic share. Thus, the market is valuing AUMN’s remaining assets at less than $0.30 per basic share. Additionally, AUMN was forced to do a revised asset valuation when it shut its Velardena mine in 2013, creating a balance sheet PP&E value of $30.6 million or $0.65 per basic share, as of Q2 2014. We believe this asset valuation is conservative and, thus, we believe AUMN’s market valuation is a value opportunity. We are upgrading from Neutral to Buy and lowering our price target from $1.30 to $1.15 to reflect the increased share count.” 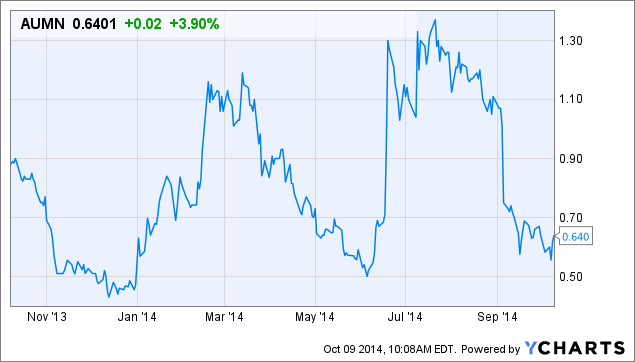