Endo: The Worst Is Over And There Is More Visibility Into Longer-Term Growth, Says Cantor

In a research report released this morning, Cantor analyst Irina Rivkind upgraded shares of Endo Health Solutions (NASDAQ:ENDP) to Hold from Sell, with a $56 price target, as the company bolsters men’s healthcare business with Auxilium deal.

Koffler wrote, “Though we take a conservative view of Auxilium’s portfolio, we believe that Endo can attain +6.7% EPS accretion in 2015, with longer-term increases in EBITDA to facilitate additional M&A. We are not expecting meaningful deal flow over the next six months while Endo pays down a large portion of its mesh litigation settlement and works to integrate Auxilium. We believe that the worst is over and there is more visibility into longer-term growth. Our prior SELL rating was predicated on valuation, not catalysts.” 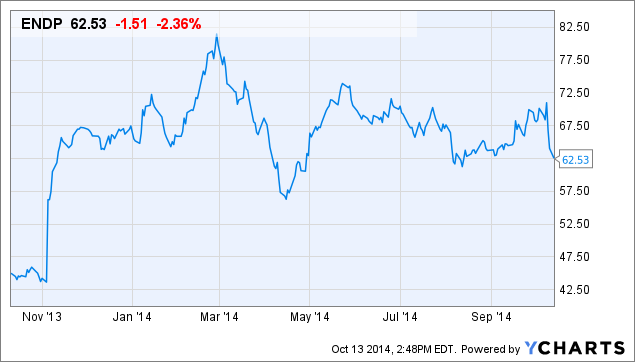