In a research report issued today, Deutsche Bank analyst Carlo Santarelli downgraded shares of Las Vegas Sands (NYSE:LVS) to a Hold rating and lowered his price target to $65 (from $74), as Santarelli believes the company is losing its competitive advantage.

Santarelli wrote, “While we continue to believe the Macau market has a favorable longer term arc, driven by room supply growth, infrastructure, and deeper mainland penetration, we see fundamental ambiguity, what we believe will be an elongated share loss story, and margin pressure, resulting in a fair valuation here. With the onslaught of new supply, we believe the primary competitive advantage for LVS, scope, is waning. As market growth slows and share contracts, we expect negative revisions and multiple contraction and hence, we see shares as range bound.”

The analyst added, “Our downgrade is not fueled by a belief that there remains significant downside left in shares and while we don’t hold onto valuation as a crutch to protect from further downside, we simply can’t empirically support things getting materially worse in Macau relative to current expectations. That said, in the case of LVS, we struggle with the lack of visible and sustainable catalysts. At present, we see LVS as the least likely of the 3 Macau operators in our coverage universe to experience a meaningful lift upon stabilizing trends in Macau for the following reasons: 1) share losses stemming from the lack of a truly needle moving development by which to drive growth in the medium term and underperformance relative to fair share historically, 2) heightened Macau VIP risk relative to peers, and 3) Consensus estimates remain meaningfully elevated and are largely predicated on mass market mix driving margin expansion in 2015, something we no longer believe to be likely. While we see Japan as a likely positive catalyst in the 4Q14, we anticipate the process will be bumpy, with certain binary legislative plans potentially curtailing returns and ultimately, we believe the Japan news serves as a short duration positive catalyst with trading in shares over the medium term ultimately proving to be predicated on Macau trends.” 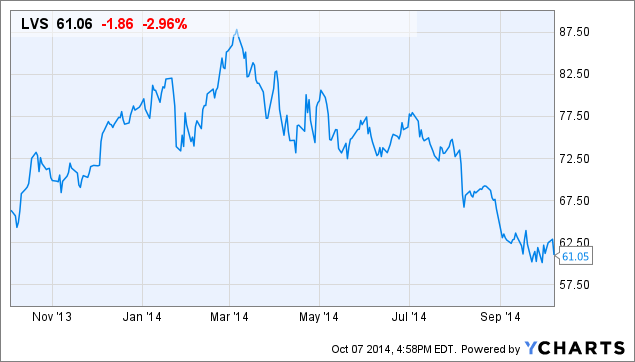 Will Las Vegas Sands Loose Some Of Its Volatility And Get Into A Steady Growth?