In a research report issued Thursday, Deutsche Bank analyst Jorge Beristain downgraded shares of Cliffs Natural Resources (NYSE:CLF) to Hold rating, and reduced his price target to $10, as the company determined that the potential to reach an agreement with prospective equity partners will not be possible by YE14 for its BL operations.

Beristain noted, “Estimated closure costs to be $650-700m (including take-or-pay contracts) over five years, but is considered to be “worst case scenario”. Closure costs could be lowered and potential offsets could emerge (lower SG&A, reduced capex). Cliffs to rely primarily on US iron ore segment, while it continues to entertain potential sale of Asia Pacific iron ore and NA Coal segments.”

The analyst explained his new price target, saying “Cliffs’ PT of $10 is now based on 0.85x (from prior ~1.0x) our revised NPV of ~$12 ($16), calculated under a DCF-methodology. Increased net debt to EBITDA is becoming a source concern and reason for applying 15% discount to NPV. Risks include higher-/lower-thanexpected iron ore and coal prices, possibility of breaching covenants (on reduced cash flow generation) and increase/decrease of foreign exchange rates, particularly for the AUD.” 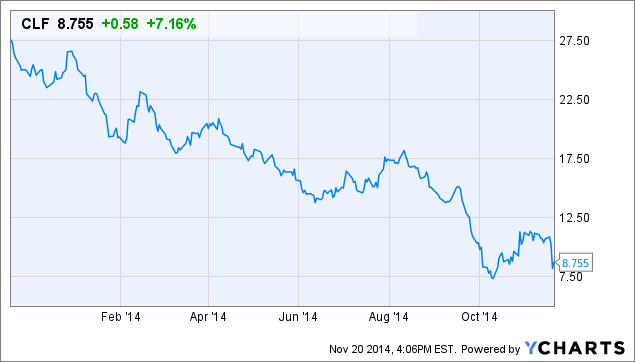