In a research report published Monday, William Blair analyst Bhavan Suri downgraded shares of Datawatch (NASDAQ:DWCH) to Market Perform rating, as the company reported fourth-quarter results that came in well below consensus expectations on the top line, but two cents ahead of the Street’s target on the bottom line. No price target was provided.

Suri noted, “Although some of the underperformance can be attributed to the continued drag from legacy products (e.g., Report Manager On-Demand) and a largerthan- anticipated number of real-time (i.e., data in motion) deals, the complexity of which led to an increase in the length of sales cycles during the quarter, the inability of the core visualization business to offset the impact of these factors suggests that demand is not materializing as quickly as we expected. In addition, the large top-line miss represents the second significant misstep since the company’s follow-on offering earlier this year, which we believe will keep shares range-bound.”

The analyst concluded, “While we continue to like Datawatch’s positioning longer term given our unchanged view that the company possesses differentiated technology versus other next-generation BI vendors from a data preparation and data ingestion perspective, the key factors we expected to drive a rapid acceleration in near-term revenue growth are not materializing at the rate we anticipated.”

According to TipRanks.com, which measures analysts’ and bloggers’ success rate based on how their calls perform, analyst Bhavan Suri has a total average return of 7.1% and a 66.7% success rate. Suri has a 5.5% average return when recommending DWCH, and is ranked #920 out of 3377 analysts. 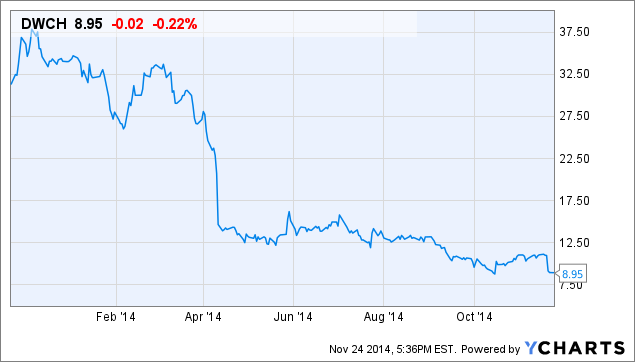 Watch Out Tesla, Is That Apple in the Rear View Mirror?