In a research report released Friday, Needham analyst Rajvindra Gill upgraded shares of Cypress Semiconductor Corporation (NASDAQ:CY) from Buy to Strong Buy, while the price target is unchanged at $20/share. The increased rating comes on the back of solid guidance reported for second-quarter 2015.

Gill noted, “CY reported its first consolidated quarter with CODE, and as expected it was messy, including several one-time charges. However, CY provided solid 2Q guidance reflecting ongoing strength in the standalone CY and CODE businesses as well as the start of the opex synergies. Importantly, CY increased its synergy target to $160MM from $135MM, which takes effect at the end of 2016/early 2017, and primarily driven by manufacturing savings.”

Furtermore, “The shares have fallen ~20% from its peak on a vacuum of information as the merger was finalized. Now that CODE is fully integrated into the model and we have better visibility into the earnings power, we are upgrading to Strong Buy from Buy. Given the sell-off in the shares, plus the dividend yield, we see favorable risk/reward with 50%+ upside potential at current levels.”

According to TipRanks.com, which measures analysts’ and bloggers’ success rate based on how their calls perform, analyst Rajvindra Gill has a total average return of 23.0% and a 63.2% success rate. Gill has a 6.1% average return when recommending CY, and is ranked #26 out of 3587 analysts. 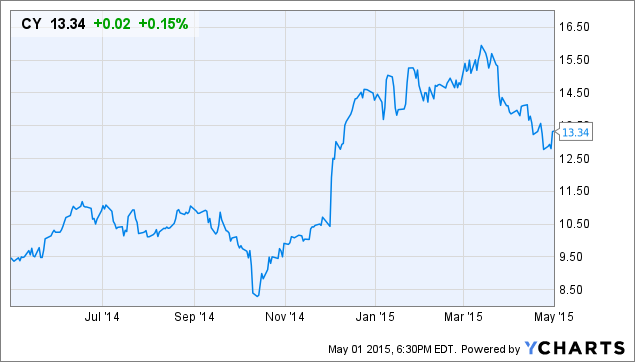