Kraft Foods Group Inc (NASDAQ:KRFT) received another set of praises from analysts at Canaccord in a research note released today. The research team, led by analyst Alicia Forry, upgraded KRFT to Buy rating and raised the price target to $96 (from $67), which represents a potential upside of 15% from where the stock is currently trading. The increased rating and price target come in response to the announcement that 3G will take control of the company.

Forry noted, “The transaction is expected to close during the second half of 2015; we do not anticipate any material anti-trust challenges as the two businesses have very little product overlap. This transaction is a complete game-changer for Kraft, which we regard very positively, and we move our recommendation to BUY, with a new target price of $96.”

Furthermore, “Considering the valuation premium observed at ABI and Restaurant Brands, two of 3G’s other successful ventures in the Consumer space, we believe a premium is now warranted for Kraft Heinz. We apply a 20x PE and 14.6x EV/EBITDA multiple (premia of 5% and 17%, respectively, to the sector) to the 2017 figures, which fully incorporate the synergies and lower interest expense, to derive our new $96 target. The dividend of $2.20 would still give shareholders a yield of 2.3% at our target price, higher than several large Consumer Staples companies including Mondelez.” 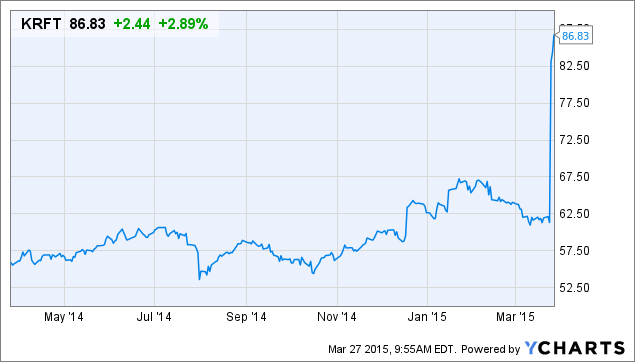