Canaccord Genuity analyst Camilo Lyon weighed in with a few insights on Michael Kors Holdings Ltd (NYSE:KORS), following the company’s weak fourth-quarter earnings results, and even weaker F2016 outlook. The analyst downgraded KORS shares from Buy to Hold, while reducing the price target to $48 (from $63).

Lyon noted, “We believe the downside earnings risk is magnified in 2017 when the company’s retail sq. ft. growth plans reach a ceiling, and comp growth is the sole driver of retail. Therefore, we are hard pressed to believe the company can return to double-digit top- and bottom-line growth. Despite the sharp decline in KORS’ stock, we would not be chasing it here on the valuation argument, principally because we believe there is further earnings risk in which we project 2017 to be a down earnings year. As such, we are lowering our estimates and reducing our price target.”

According to TipRanks.com, which measures analysts’ and bloggers’ success rate based on how their calls perform, analyst Camilo Lyon has a total average return of 8.3% and a 60.0% success rate. Lyon has an 0.9% average return when recommending KORS, and is ranked #488 out of 3610 analysts. 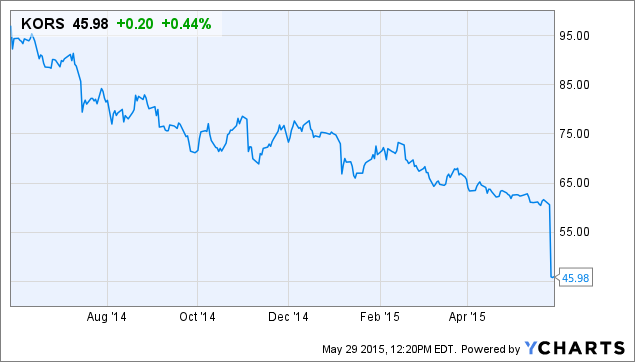 Michael Kors Holdings Ltd Will Continue To Walk All Over Earnings