Kraft Foods Group Inc (NASDAQ:KRFT) shares are up 39% today following the news that the Brazilian private equity firm 3G Capital Partners is in “advanced talks” to acquire the company for more than $40 billion.

Subsequently, ​Canaccord Genuity analyst Alicia Forry came out with a research note, upgrading KRFT from Sell to Buy, and raising the price target to $70 (from $55), which implies a downside of 14% from current levels.

Forry noted, “The reports are credible to us, with the availability of substantial synergies from merging Kraft with Heinz, which is already owned by 3G and Buffett. Previous reports have suggested that 3G has been raising funds for a Consumer deal, while Kraft’s large brands and simple business model suit Buffett’s investment ethos.”

Furthermore, “We raise our own target price to $70/share, noting that we see no counterbidders and limited antitrust concerns. We had previously downgraded the shares (on 19th January 2015), given unexpected changes at CEO and CFO level and continued top line weakness, both at Kraft and in the US Food industry as a whole; margin progression has been good, so upside appeared limited to us. However, the potential bid is clearly a game-changer.” 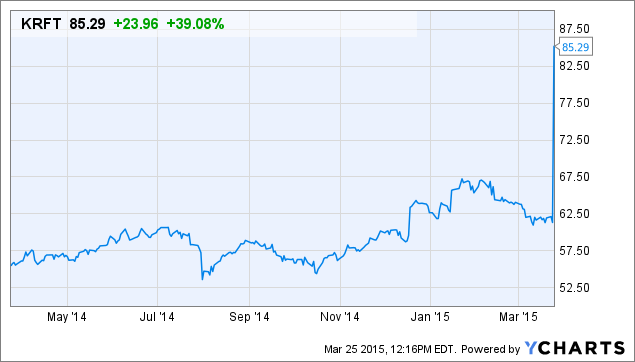