In a research published today, Brean Capital analyst Jonathan Aschoff downgraded shares of Endocyte (NASDAQ:ECYT) from a Buy to a Hold rating, on the heels of the data at ESMO, which showed that the differences in PFS and OS were not statistically significant. No price target was provided.

Aschoff wrote, “Over the weekend at ESMO, full PFS and interim OS data from Endocyte’s Phase 2b TARGET trial with vintafolide were presented. Vintafolide in combination with docetaxel numerically extended PFS and OS compared to docetaxel alone in all patients with folate receptor positive (FR+) NSCLC, and numerically in a subgroup of patients with adenocarcinoma NSCLC; however, the differences in PFS and OS were not statistically significant for all patients or for this subgroup. OS results were statistically significant only in a subgroup after a prospectively defined stratification was performed, and Endocyte is now planning a Phase 3 trial with either vintafolide or EC1456 for FR+ adenocarcinoma NSCLC, but will wait until it obtains mature OS data from the Phase 2 TARGET trial in early 2015 and updated data from the ongoing Phase 1 trial with EC1456 in order to choose one for Phase 3, which likely starts sometime in 2015.”

According to TipRanks.com, which measures analysts’ and bloggers’ success rate based on how their calls perform, analyst Jonathan Aschoff has a total average return of 13.9% and a 54.7% success rate. Aschoff is ranked #206 out of 3326 analysts 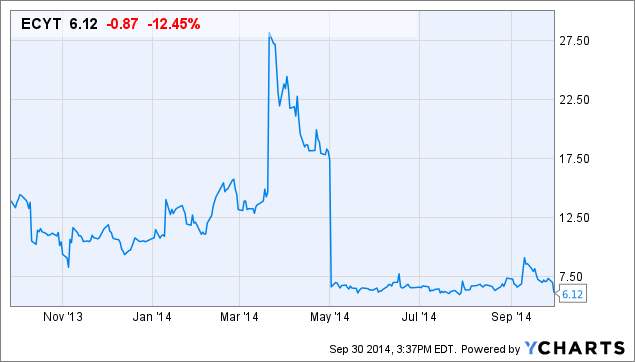