In a research report released Friday, Argus analyst Jim Kelleher downgraded shares of Juniper Networks (NYSE:JNPR) from a Buy rating to a Hold based on the company’s slowing top- and bottom-line momentum. No price target was provided.

Kelleher wrote, “Juniper has reduced its third-quarter guidance, citing soft demand particularly from North American carriers. Juniper is more heavily exposed than its peers to U.S. carrier business. As a group, U.S. carriers continue to invest in wireless infrastructure, where Juniper is under-represented, while weighing options and holding off spending on SDN and core network gear.  Juniper is now modeling 3Q14 revenue of $1.11-$1.12 billion, reduced from guidance issued in July for revenue of $1.15- $1.20 billion. Adjusted EPS is now forecast in a range of $0.34 to $0.36 per diluted share, reduced from earlier guidance of $0.35- $0.40. The Street had been modeling revenue of $1.18 billion and non-GAAP EPS of $0.38 per diluted share. More significantly, top-line comparisons, which were positive year-over-year in the first half, are now tracking negative for the third and fourth quarters.”

The analyst added, “Beyond the third quarter, we are concerned about Juniper’s performance in coming quarters based on uncertain carrier spending trends. Carrier spending remains focused on supporting wireless capacity, where Juniper has limited exposure. In terms of the IP core, spending on next-generation initiatives such as software defined networking has been slow to materialize, as carriers weigh competing architectural approaches. While Juniper offers next-generation solutions such as SDN and data center fabric, the company’s legacy products and services are not aligned with current service provider spending priorities.  Juniper stated that it continues to enact cost reduction initiatives. While that helps mitigate some of the top-line weakness, it also signals that the company is not modeling imminent recovery in North American carrier spending. We have reduced our revenue and margin outlook for Juniper for 2014 and 2015. Further price declines are unlikely to prompt a ratings upgrade; we need to see clear signs of top-line re-acceleration before considering a more aggressive rating.” 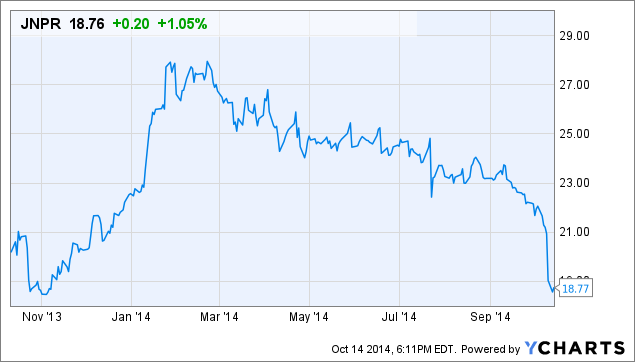