Alexza: We believe In The Long-Term Potential, But We Will Choose To Be On The Sidelines, Says Roth Capital

In a research report published August 8, Roth Capital analyst Scott Henry downgraded shares of Alexza Pharmaceuticals (ALXA) from a Buy to a Neutral rating with a price target of $5.50, following the company’s quarterly results which were positive but leaned towards the lower end of Henry’s expectations.

Henry noted, “ALXA reported 2Q14 revenues of $1.5 million, which matched our target. COGS was higher and gross margins remain negative (as expected). Spending was largely as expected, but a 1X change in fair value of contingent consideration motivated the lower loss. Net, the EPS loss of $0.34 was below our targeted EPS loss of $0.67. Fundamentally, we viewed the quarter on the weaker side as the revenue ramp for Adasuve appears slower than originally targeted.”

Henry continued, “We believe that Adasuve (approved hospital delivered agitation product) is a high-value add product that will one day be a big seller – perhaps reach peak sales of $200 million or higher. That said, the timing of these revenues is clearly longer than expected. ALXA’s 10-Q itself largely implies that the inflection point will not be in 2014 (product revenues should decrease in 4Q14).” Henry added, “Teva placed a big bet on Adasuve and debt holders also funded the royalty, which indicates the product’s potential. We also believe in the long-term potential, but we will choose to be on the sidelines and ready to be more aggressive when the inflection point does appear. This likely will not happen prior to 2015.” 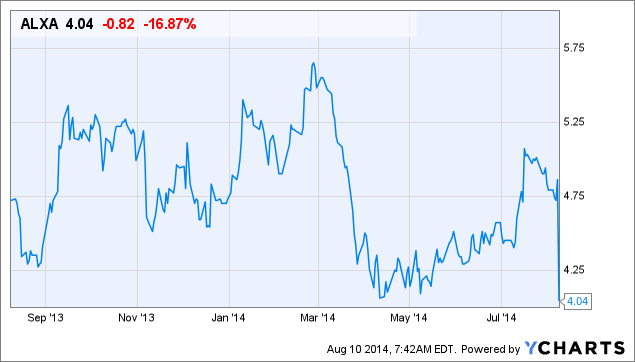