Yelp Inc (YELP): What Analysts Have To Say About Recent Earnings Results

Shares of Yelp Inc (NYSE:YELP) were hammered last week following the release of the company’s first-quarter earnings results. The results, which fell way below consensus, were especially disappointing due to the deceleration of user growth and local advertising. In response to these poor results, analysts from Cantor Fitzgerald, Piper Jaffray, and RBC Capital shared their thoughts and expectations of the stock. Yelp shares are currently trading at $38.96, down $0.80 or 2.01%.

Cantor Fitzgerald analyst Youssef Squali maintained a Buy rating on Yelp and reduced the price target to $68 (from $78). The analyst explained the price target reduction, stating “Yelp missed consensus estimates for 1Q:15, with local ad revenue impacted by a territory change made to the sales organization, and disappointing brand ad revenue caused by the industry shift to programmatic advertising.”

Squali also justified his Buy rating by explaining, “That said, mgt seems to have remedied the sales territory issue and has since seen sequential improvement; it has also seen amelioration in the Brand pipeline, prompting it to reaffirm FY:15 guidance.”

Additionally, Piper Jaffray analyst Gene Munster reiterated a Buy rating on the stock with a price target of $70, representing a potential upside of 76% from where the Yelp is currently trading. Munster expounded upon his positive rating stating,”We believe shares of YELP will be range bound over the next quarter given investors will be concerned about guidance calling for accelerating revenue in the back half of the year, reducing the urgency to own YELP for the next three months. That said, we believe investors with a 6-12 month time horizon should buy shares as Yelp is part of the fabric of the Internet and is not going away.”

RBC Capital analyst Mark Mahaney took the other route, downgrading YELP to Sector Perform (from Outperform) and slashed the price target from $82 to $50. The analyst defended his negative stance on thew stock by observing, “YELP posted a materially weak Q1, with an outlook for Q2 that implies ongoing deceleration. Metrics deteriorated too.”

Mahaney also noted, “A Miss & Lower Q1 – Rev of $119MM came in below RBC/Street @ $120MM and at low end of the Guide for 1st time. The key Local Ad segment came in light, with Yelp citing a temporary salesforce issue. Hw, the Q2 Guide doesn’t imply a temporary problem, suggesting competitive challenges or Tough TAM factors or both. EBITDA also came in dramatically below expectations at $16MM, or 21% below Street, with a shortfall in high-margin Brand rev a key factor. Although ‘15 Guide was maintained, the Q2 Guide was well below Street, implying heightened risk to H2 estimates.” 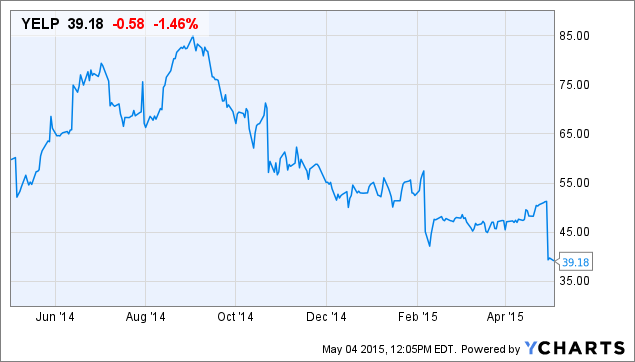