Gene Munster, managing director and senior research analyst at Piper Jaffray, weighed in today with a research report on Yelp Inc (NYSE:YELP) and Google Inc (NASDAQ:GOOGL). The analyst measured Yelp and Google Plus review growth of 500 places in 20 major cities in the U.S. on a monthly basis. The goal is to measure the consumer review trends between Yelp and Google Plus.

Munster noted, “Thus far in the June quarter, the total number of Yelp reviews grew 3.9% from end of March 2015 to today, which is slightly below Google Plus review growth at 6.0%. Although review growth in Yelp is slower, we note that the 500 places on Yelp contain 5.3x more reviews vs. Google (87,971 on Yelp vs. 16,498 on Google Plus). Yelp’s review dominance remains, in our view.”

The analyst continued, “In our update of tracking of the number of reviews on Yelp compared with Google Plus, our data shows that Google Plus is growing reviews quarter over quarter by 6% vs. Yelp at about 4%. This compares to our March 2015 survey, which showed Google Plus growing at 4.7% and Yelp at 5.7%. While mathematically Google Plus is gaining on Yelp, we note the pace of growth (6% vs. 4%) is similar and the review landscape remains unchanged with Yelp still dominate. If Google Plus review growth were to accelerate with Yelp review growth unchanged over a 6-12 month period we would be more cautious on Yelp’s fundamentals. At this time, we see no reason for concern.”

In his report, the analyst reiterated a Neutral rating on Yelp Inc. with a price target of $46, which represents a slight downside potential from current levels. 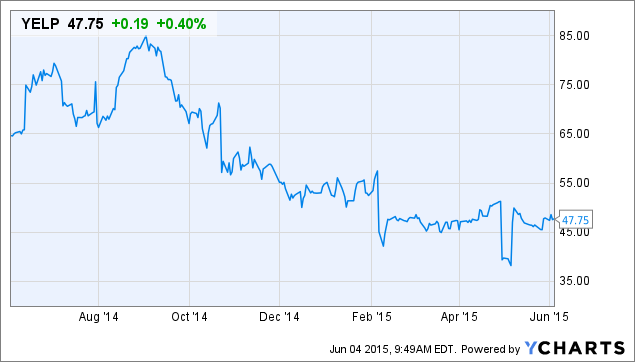