Analysts are weighing in today on Yahoo! Inc. (NASDAQ:YHOO), following Bloomberg article that quotes an IRS official stating that the agency is considering changes to the rules regarding spinoffs and will suspend requests received as the issue is studied. The potential change in U.S. tax regulations would affect Yahoo’s expected spinoff of its stake in Alibaba Group Holding Ltd (NYSE:BABA).

Cantor Fitzgerald analyst Youssef Squali views commentary from the IRS’s Office of Associate Chief Counsel as raising a cloud of uncertainty around Yahoo!’s plans to hold a tax-free spinoff of its shares in Alibaba.

The analyst wrote, “It is not yet clear whether Yahoo! will be grandfathered if the IRS rules were to change. That said, assuming that Yahoo! fails to achieve any tax efficiency, that would reduce our fair value to ~$44/share.”

The analyst reiterated a Buy rating on Yahoo! Inc.’s shares, with a price target of $60, which implies an upside of about 42% from current levels.

Helfstein noted, “We assume YHOO/BABA is already submitted, but have not confirmed with management. Based on YHOO’s closing price, we believe the market is now pricing in an unfavorable ruling. Our sensitivity analysis shown suggests YHOO shares would trade between $40-63 depending on BABA appreciation and a unfavorable/favorable IRS ruling.”

The analyst reiterated an Outperform rating on the stock with a price target of $58, which represents a potential upside of nearly 37% from where the stock is currently trading.

Axiom analyst Victor Anthony believes that the statement has invoked an element of meaningful risk tied to the spin-off of Yahoo’s 384M shares of Alibaba Group Holding Ltd slated for 4Q. However, he still thinks that the IRS official’s statements do not apply to Yahoo.

Anthony stated, “At an investor conference earlier in the day yesterday, Marissa admitted that the preparation for the spinoff is a surprising amount of work but Yahoo remains on track on both the legal and regulatory components and the actual separation of Yahoo Small Business to deliver the spinoff by 4Q. We would hate to think that she was blindsided by the IRS official’s statement. We would have to believe that if there were concerns by the IRS as drastic as those stated yesterday, she would have been aware of them previously and would not have made those statements at the conference.”

Furthermore, “If we are correct that the official’s statements do not apply to Yahoo, then the pullback presents a buying opportunity as the current valuation of the shares implies that Yahoo’s Core business is valued at -$5B in our SOTP vs. $5.75B at a 5.0x multiple to our 2016 EBITDA. This is irrational, in our view.” 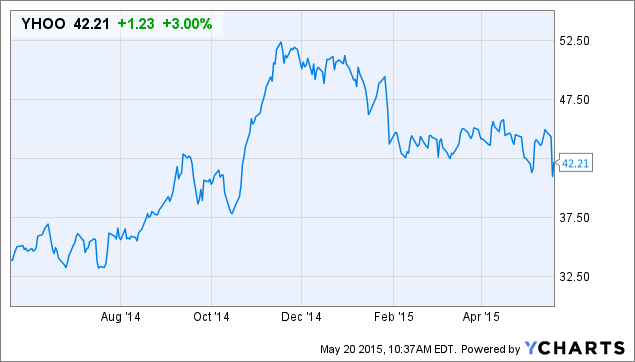