Furby wrote, “Workday delivered another solidquarter, with billings growth of 56% coming in well above the Street’s 40% projection, and bolstered by HCM wins at a Fortune 500 financial services company and Bank of America —Workday’s largest customer signing yet (roughly 300,000 seats). Management also materially raised its billings guidance, now expecting 57%-61% billings growth this fiscal year—the midpoint of which is $90 million, or roughly 10% higher than the company’s initial outlook provided in February. Second-quarter revenue and earnings also came in well above the Street and guidance, and management raised its full-year outlook on both the top and bottom line by more than the second-quarter outperformance. It now expects full-year revenue growth of 62%-64% and non-GAAP operating margin of negative high single digits (up from last year’s -18.6%) as the model is starting toscale nicely.”

The analyst added, “The stock trades at 15.9 times our updated calendar 2015 revenue estimate, a premium to the fast-growth group, which trades at 9.4 times. It is difficult to make any sort of near-term stock calls on Workday given its lofty valuation, but we continue to believe the long-term fundamentals remain very much in place. Workday has the addressable market, product differentiation, and management team in place to become a $10 billion-plus revenue company over the nextdecade, and for long-term oriented investors, we continue to recommend shares. In the near term, potential catalysts exist at the annual Rising Conference; although the company will not beholding an analyst day in conjunction with the event, management alluded to several major product announcements, and we would not be surprised if the company unveiled new customer logos at Rising.” 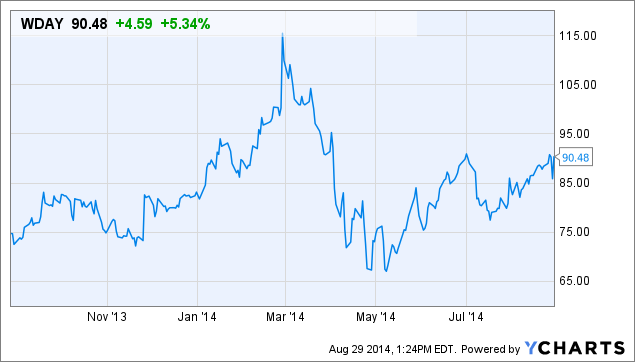