With Peregrine Being A Pivotal Stage Company, We View The Risk/Reward Profile As Favorable, Says Roth Capital

In a research note released today, Roth Capital analyst Joseph Pantginis reiterated coverage with a Buy rating on shares of Peregrine Pharmaceuticals, Inc. (PPHM) and a $5 price target. The report follows yesterday’s FY14 results, posting EPS of ($0.22), in line with Pantginis estimate and the consensus estimate.

Pantginis commented: “We believe management’s successful efforts in expanding bavi’s profile and strengthening the balance sheet could drive partnership discussions, which are underway. Peregrine continues to focus on commercialization of bavituximab. Over 100 sites are now open for the ~600 patient Phase III SUNRISE trial of bavituximab +docetaxel in Stage III or IV NSCLC in the U.S., E.U., and Asia-Pacific. The study is powered to support primary approval and recently received Fast Track status in the U.S. Management has indicated that early enrollment progress in the study is meeting expectations. Business development activities, including partnership discussions, are underway. PPHM also indicated that it is looking to expand bavituximab’s profile into other indications, with particular interest in the breast cancer indication. Recall that at ASCO 2014 the company announced data from an IST of bavituximab + paclitaxel in HER2-negative metastatic breast cancer. Data showed 85% of patients achieved ORR, with 15% achieving CR by RECIST. Several other IST’s are also underway, including a Phase I/II evaluating bavituximab + sorafenib in advanced liver cancer, a Phase Ib evaluating bavituximab + carboplatin + pemetrexed in previously untreated Stage IV NSCLC, and a Phase I study evaluating bavituximab + capecitabine + radiation in Stage II or III rectal cancer. In F4Q14, PPHM also announced a Phase Ib IST of bavituximab + Yervoy (BMS-NC) for advanced melanoma”.

In conclusion, “With Peregrine being a pivotal stage company, we view the risk/reward profile as favorable, and we believe visibility from the broadening bavituximab profile and partnering potential should drive the stock in 2014”.

According to TipRanks.com, which measures analysts and bloggers success rate based on how their calls perform, analyst Joseph Pantginis currently has an average return of -7.7% and a 37% success rate. Pantginis has a 44.9% average profit recommending PPHM, and is ranked #3162 out of 3215 analysts. 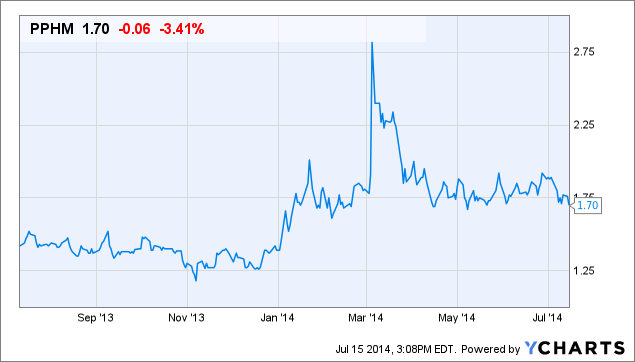