WisdomTree: We Remain On The Sidelines, Says William Blair

On Friday, WisdomTree Investments (WETF) reported its second-quarter results; GAAP EPS of $0.08 exceeded consensus estimates by a penny. Revenue grew 18%, to $44.1 million, and was essentially in line with consensus. Earnings upside was driven by lower-than-anticipated operating expenses.

In reaction to the results, William Blair analyst Christopher Shutler yesterday maintained a Market Perform rating on the stock. No price target was assigned.

Shutler noted, “At $10.97, the stock trades at 32 times our 2015 GAAP EPS estimate. After factoring in the present value of NOLs and excluding stock comp as well as European start-up losses, the multiple falls into the mid-20s. In addition, WisdomTree has $129 million of cash on the balance sheet, and it feels like management is getting closer to deploying some of that cash, likely by initiating a regular dividend. We believe the company is doing a nice job expanding its product suite, a factor that is probably still underappreciated. Still, we remain on the sidelines based on lack of perceived near-term catalysts coupled with our expectation of continued DXJ outflows and a volatility in WisdomTree shares given its positioning as a high-multiple asset management stock in a potentially more volatile equity market”.

According to TipRanks.com, which measures analysts’ and bloggers’ success rate based on how their calls perform, analyst Christopher Shutler has a -3.8% average return and a 50% success rate. Shutler is ranked #2518 out of 3203 analysts. 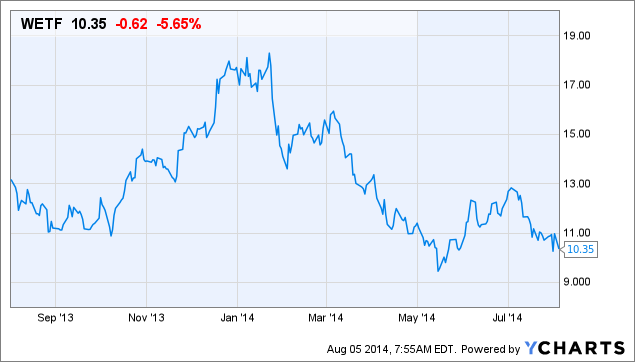