Williams-Sonoma: William Blair Analyst Recommends Investors To Establish Or Add To Positions On This Pullback

In a research report released today, William Blair analyst Daniel Hofkin maintained an Outperform rating on Williams-Sonoma (NYSE:WSM), following the company’s second-quarter results, posting operating EPS of $0.53 (7% growth) that was inline with Hofkin’s estimate and the sell-side consensus and slightly above the $0.49-$0.52 guidance. No price target was provided.

Hofkin noted, “We believe that revenueand gross margin were somewhat shy of investor expectations going into the release, while SG&A expense was better than expected.” The analyst added, “The shares are likely to sell off materially on the second-quarter results and guidance, particularly given heightened investor expectations going intothe release. We believe that the basic business remains essentially on track and that investors can establish or add to positions on this pullback. We forecast that Williams-Sonoma is likely to represent a “beat-and-raise” story more often than not and that the shares could benefit further over timefrom an improving housing market, a continued mix shift toward the direct channel (which should enhance operating margins and ROIC), continued improvement in the Williams-Sonoma brand (a more compelling andexclusive merchandise andservices offering, an enhanced selling culture, etc.),and a still largely untapped international expansion opportunity (which could ultimately be as large as the United States).” 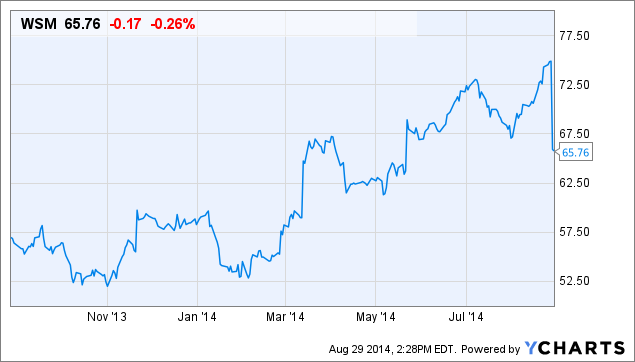