Furby wrote, “Some investors have expressed concern to us that Workday has already picked off the low-hanging fruit and that thenext 700 customers will be much more difficult to acquire than the first 700. Management points out, however, that sales cycles in the HR market remain relatively unchanged, andif anything, it has been easier for the company to get in the door as it continues to add large reference customers such as Flextronics (FLEX) and HP (HPQ). Although Oracle (ORCL) and SAP (SAP) arebeing aggressive on price and are winning deals, management’s win rate commentary was bullish—it pointed to the analysis provided at last year’s analyst day, which suggested Workday was winning nearly two-thirds of its deals in which companies were making a decision (i.e., for an upgrade or to switch vendors), and it said it hoped to further improve that rate”

“The stock trades at 14 times our updated calendar 2015 revenue estimate, a material premium to the overall group. It is difficult to make any sort of near-term stock calls on Workday given its lofty valuation, but we continue to believe the longterm fundamentals remain very much in place and that the company’s pipeline remains healthy, as supported by the recent Elevate event. Workday has the addressable market, product differentiation, and management team in place to become a $10 billion-plus revenue company over the next decade, and for long-term-oriented investors, we continue to recommend shares”, the analyst concluded.

According to TipRanks.com, which measures analysts and bloggers success rate based on how their calls perform, analyst Justin Furby currently has a one-year average return of 2.1% and a 20% success rate. Furby has a 7.2% average return when recommending WDAY, and is ranked #2210 out of 3215 analysts. 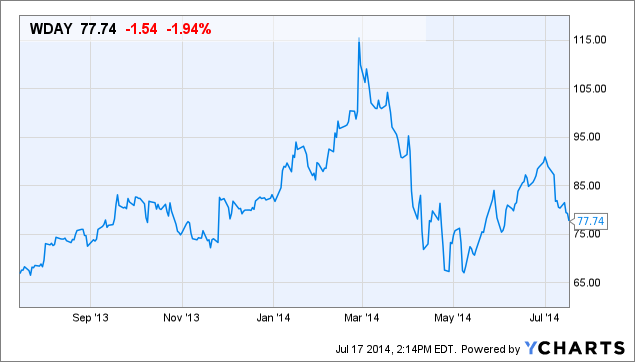