William Blair Weighs In On Shake Shack Inc Ahead of 1Q:15 Results

In a research report published today, William Blair analyst Sharon Zackfia shared her expectations on Shake Shack Inc’s (NYSE:SHAK) anticipated earnings report, which is expected to be released early to mid-May. The analyst had a cautious, yet positive outlook for the results, and maintained a Perform rating on the stock without providing a price target. Shares of Shake Shack Inc are currently trading at $68.25, down $1.11, or 1.60%.

Zackfia observed, “We expect Shake Shack will likely beat our first-quarter operating EPS estimate for a loss of $0.04, versus consensus expectations for a loss of $0.03.” Furthermore, “We see upside to our projection for a 5% same-store sales gain against a 3.9% comparison, particularly as the company took a price increase in January that brought the cumulative price benefit to roughly 6% in the quarter. Despite winter weather that may have hurt the New York market somewhat (about half of the comp base of 13 locations), we suspect traffic trends were flattish to modestly positive traffic, which would translate into a high-single-digit comp gain.”

Bottom line: “While we continue to believe in Shake Shack’s potential to ultimately generate at least $1.5 billion in revenue and great $350 million in EBITDA, we remain on the sidelines given its rich valuation of roughly 203 times our 2016 EBITDA estimate, particularly as we expect some inherent volatility in Shake Shack’s quarterly results given its small restaurant base and real-time exposure to commodities.”

According to TipRanks.com, which measures analysts’ and bloggers’ success rate based on how their calls perform, analyst Sharon Zackfia has a total average return of 19.3% and a 66.7% success rate. Zackfia is ranked #357 out of 3581 analysts. 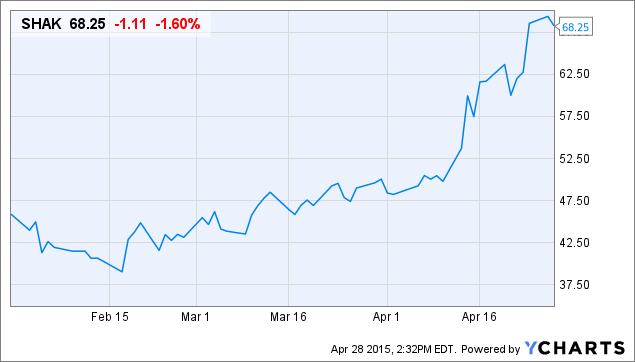