William Blair’s healthcare analyst John Sonnier weighed in today with a few insights on Exelixis, Inc. (NASDAQ:EXEL), after the biopharmaceutical company announced that the the Swiss authority which responsible for the authorization and supervision of therapeutic products, approved cobimetinib (trade name Cotellic) in combination with Roche’s Zelboraf for the treatment of advanced melanoma.

Sonnier wrote, “We believe Cotellic’s commercial opportunity could materially contribute to Exelixis’s top line. Recall that under the terms of Exelixis’s co-development agreement with partner Roche, the company is eligible to an equal share of U.S. profits and losses for Cotellic. Specifically, Exelixis is entitled to receive 50% of profits from the first $200 million of U.S. sales, decreasing to 30% of profits from U.S. sales above $400 million. In addition, Exelixis may provide up to 25% of the total salesforce. Outside the United States, Exelixis receives low-double-digit royalties on net sales. In terms of revenue contribution, we project a very modest impact in 2016 and increasing to $51 million in 2017.”

Sonnier maintained an Outperform rating on Exelixis stock, without providing a price target.

Out of the 4 analysts polled by TipRanks, 3 rate Exelixis stock a Hold, while 1 rates the stock a Buy. With a downside potential of 57.3%, the stock’s consensus target price stands at $2.50. 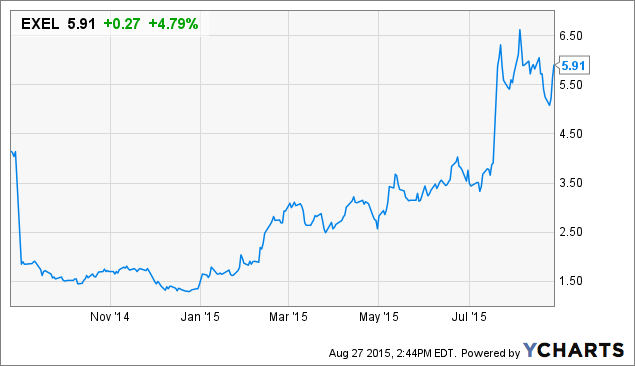