Suri wrote, “A key concern raised by investors was that current guidance implies a large sequential ramp-up in revenue growth in the company’s fiscal fourth quarter—around 25% versus typical historical levels around 15%. We point out that two deals that were originally expected to close in the third quarter were pulled into the second quarter, which is the reason for the deviation from normal seasonality. Our sense is that the deals accounted for roughly $17 million of revenue in the second quarter, and adding this amount back to our estimate for the third quarter yields an implied fourth-quarter sequential growth number that is much more in line with typical seasonality. As a result, given that our expectations for full-year revenue on an absolute dollar basis have not changed, management’s encouraging commentary about the demand environment outside the company’s top-50 accounts, and our belief that the second-half backlog is trending nicely, we believe Teradata is currently well-positioned to at least meet its full-year revenue guidance.”

The analyst continued, “Although we came away incrementally confident in Teradata’s ability to achieve its full-year guidance, we believe the company continues to face a tenuous capital expenditure environment at large enterprises and while our surveys suggest some large deals in the pipeline that could drive some upside, there is very limited visibility as to when these deals might close. Given that there was little to offset the secular bear thesis, we believe that it is unlikely that the stock works over the near and medium term. The stock trades at about 13.9 times our 2015 earnings estimate, below the peer group median of 32.8 times.”

According to TipRanks.com, which measures analysts’ and bloggers’ success rate based on how their calls perform, analyst Bhavan Suri has a total average return of 8.9% and a 58.3% success rate. Suri is ranked #966 out of 3290 analysts. 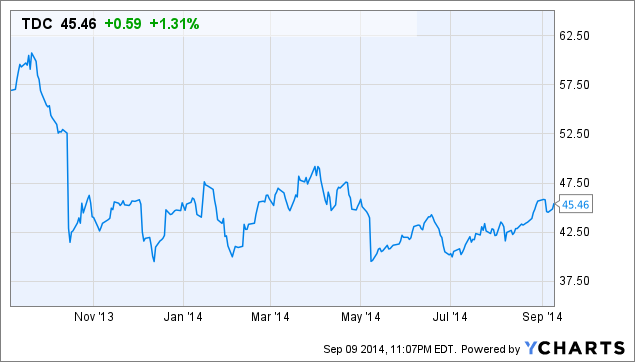