In a research report released today, William Blair analyst Sharon Zackfia reiterated a Market Perform rating on Carnival Corporation (NYSE:CCL), as the company will report fourth-quarter earnings before the markets open on Friday, December 19. No price target was provided.

Zackfia wrote, “We believe that Carnival’s fourth-quarter EPS will meet or top our estimate of $0.18, versus guidance of $0.15 to $0.19 and consensus of $0.20. We project a constant-currency net yield increase of 2.0% to 2.5%, at the higher end of guidance of 1.5% to 2.5% and improved from the third quarter’s 1.8% gain, driven by an inflection into positive net ticket yields for North American brands along with continued positive yields at European brands. As a result, we project a 3% increase in revenue, to $3.78 billion, roughly in line with consensus of $3.81 billion.”

The analyst continued, “We expect fiscal 2015 EPS guidance will encompass our estimate of $2.09 (up 12%) and consensus of $2.25. We expect management to restate expectations for an approximate 3% increase in constant-currency net cruise costs excluding fuel (skewed toward the first half of the year), although falling fuel prices should mitigate overall net cruise costs to negative territory on a reported basis.”

Zackfia concluded, “At 21 times our 2015 EPS estimate, Carnival’s stock continues to trade above its typical midteens P/E valuation. While we
are encouraged by signs of traction in yields, we believe a healthy recovery is already largely incorporated into the stock
valuation.” 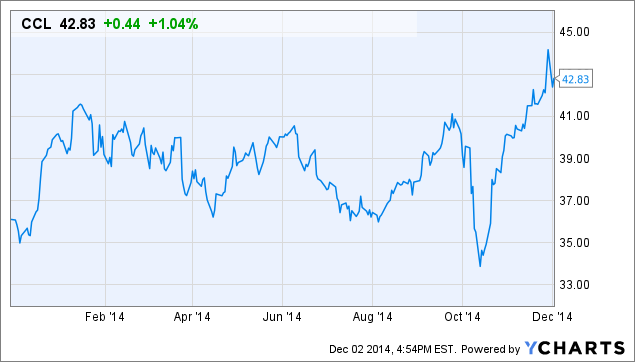