Schackart wrote, “HomeAway has not observed any incremental competition from Priceline (PCLN $1,195.02) despite its announcement on its second-quarter earnings call that its customers had spent over $4 billion on vacation rentals over the last 12 months. HomeAway suspects the majority of those bookings were multiroom units (potentially in hotels) and not necessarily located in vacation destinations. HomeAway estimates that it facilitates $10 billion to $12 billion of vacation bookings annually. As a result of the Priceline announcement, HomeAway is investigating if there is an opportunity to add select multi-unit inventory, not located in hotels but in vacation destinations, to its site.” Schackart added, “The company reminded investors that 2015 EBITDA margins may be down versus 2014 as it ramps up its marketing investment and drives absolute EBITDA dollars. HomeAway’s 2014 guidance implies EBITDA margins of 27%. In two to three years, HomeAway believes EBITDA margins will likely be above 2014 levels. While not outlining a specific long-term margin goal, Mr. Sharples acknowledged the significance of operating at EBITDA margins in excess of 30%.”

The analyst continued, “Following our meeting, we maintain our Outperform rating. HomeAway is successfully demonstrating the ability to increase average revenue per listing (ARPL) through its tiered-pricing initiative and reaccelerate paid listings growth mainly via pay-per-booking (PPB). Further, with tiered pricing on only about 40% of eligible listings and a long-term target of about 60% penetration, there continues to be a multiyear runway for ARPL lifts as tiered-pricing adoption increases. HomeAway rolled out PPB during fourth quarter 2013, and it could contribute meaningfully to revenue in 2015.” 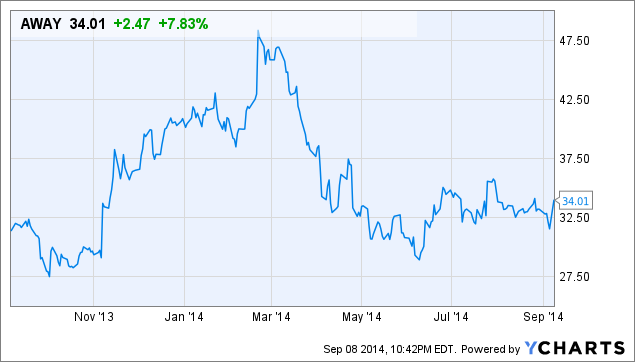