In a research report issued today, William Blair analyst Ryan Merkel reiterated an Outperform rating on Watsco (NYSE:WSO). No price target was given.

Merkel noted, “We are encouraged that key parts of our thesis are playing out—a shift to replacement continues and high-efficiency equipment sales are particularly strong. • Guidance was unchanged at $4.20-$4.40. However, as we previewed, we expect a result toward the bottom end of the range. The midpoint represents 17% EPS growth, despite less than ideal weather and sales and technology investments throughout the year. The attractiveness of Watsco’s relatively stable repair/replace business plus a shift to higher-efficiency equipment and solid execution have shown through this year. We expect more of the same in 2015. • Shares have been under pressure in recent months, but we do not believe the action is warranted. Underlying activity remains solid in southern states and any difficulty in northern states is weather driven. Given the prospect of pent-up HVAC demand, a stronger consumer, and a gradually improving housing market, the fundamental backdrop is attractive. “

According to TipRanks.com, which measures analysts’ and bloggers’ success rate based on how their calls perform, analyst Ryan Merkel has a total average return of -3.5% and a 40.0% success rate. Merkel is ranked #2544 out of 3339 analysts. 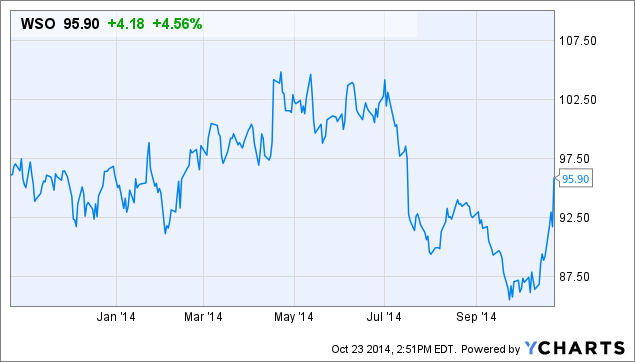